MADELEINE LOGAN* A country in the middle of Africa, one of the poorest in the world, now in the middle of a violent crisis which has displaced a quarter of the population. Why should you care about Central African Republic? [caption id="attachment_12070" align="alignleft" width="300"] 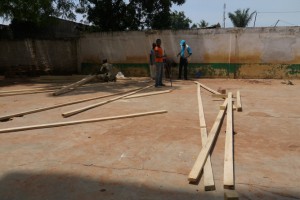 Construction of a temporary learning space. (c) UNICEF/CAR/2014[/caption] You should care because Central African Republic is Remy’s home. Remy is a nurse. When we met him, he was living in a camp for displaced people with his family. But he was still working to treat the thousands of people who fled to the bush when their villages were ransacked and burnt by rebels. He would ride along the rough dirt roads in the far west of the country; hide his motorcycle under a pile of branches; and then hike through the bush with his medical box to where people were hiding. He treated the sick before hiking back to the motorcycle and riding back to the tent where he lived. You should care because Central African Republic is also home to Abakar, a former high-level Government official who for months couldn’t leave his neighborhood, or go to his former office for fear that he would be killed because of his religion. He is committed to staying in CAR and rebuilding his country; and is leading efforts by the Muslim Teacher’s Association to set up a temporary school for children who have fled to the grounds of a mosque. The school was constructed by a team of Muslims and Christians working together. Which brings us to another reason you should care about CAR. People in Central African Republic have an ability to forgive beyond my comprehension. The man overseeing the construction of the classrooms was a Christian. His niece was killed the day before the building started, in crossfire from an attack by Muslim youth. The next day he was back at work, alongside one of the elders from the mosque. Christian rebels had killed the elder’s mother, niece, uncle and brother when they were fleeing the country. But there the two men stood, looking at building plans and measuring out classrooms. [caption id="attachment_12071" align="alignright" width="300"] 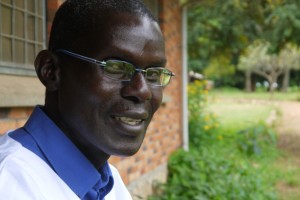 Remy, a nurse in CAR, has not allowed the extremely difficult circumstances in his country to stop him from helping those in need. (c) UNICEF/CAR/2014[/caption] There are thousands of ‘everyday heroes’ like them. The men who volunteer to clean out the toilets at displacement camps; the volunteers who get into rickety canoes to transport vaccinations to remote communities; the priests who shelter Muslim families; the Imams who preach peace; those who negotiate the release of children from armed groups. Central African Republic is poor, but it’s not poor in spirit. It is in the middle of a violent crisis; but let’s not ignore the ordinary people working for peace against all the odds. People are displaced but they are determined to continue working for their country and their people. That’s why we should all care about CAR. It’s because of Central Africans. * Source  unicef Madeleine Logan is a communications specialist who has been living in the Central African Republic since January.]]>