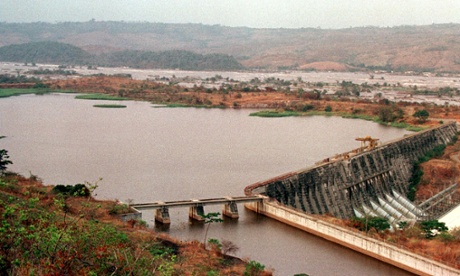 Once completed the Grand Inga dam would be the world’s biggest hydropower project. Photograph: ISSOUF SANOGO/AFP[/caption] At the end of August the South African cabinet ratified a signed treaty on the Grand Inga hydropower project with the Democratic Republic of Congo (DRC). Jeff Radebe, minister for planning, monitoring and evaluation, made the announcement at a media briefing signalling progress between the two countries. If successful, this would be the world’s biggest hydropower project with the potential to power half of Africa. But as boardroom deals are made, questions continue to linger on the viability of the project. Who stands to benefit most from it? Is it sustainable? 54 years after the ground was first broken (pdf) for project, can Kinshasa guarantee that the new phase will not become a financial burden? The site for the project is in Bas Congo, a province at the extreme south-west of DRC. It is hoped that the potential 40,000MW output will power Africa’s industrial economic development. “The Inga project capacity is almost double China’s Three Gorges dam – currently the world’s largest hydroelectric project producing 22,500 MW,” said Isaac Kalua, founder of Nairobi based environmental group Green Africa Foundation. However, the dam is not without its critics. There are questions about its financing and what’s in it for the bankrollers. The World Bank and several other financial institutions like the African Development Bank, are funding the project to completion through grants and loans. “The project will strengthen DRC’s institutional capability by establishing an autonomous and transparent Inga Development Authority. The project will also finance technical, environmental, and social studies to develop the Inga III and selected mid-size hydropower projects sustainably,” said the World Bank in a press release earlier this year. South Africa will also finance part of the project. In 2013 it was reported that R200bn has been set aside and state owned power company, Eskom, will receive 2,500MW of the 4,800MW produced by Inga III, the project’s first phase. “The project will primarily benefit SA and mines in Katanga. Only 1000MW will be sold to national power company Société Nationale d’Electricité (Snel) for consumers in Kinshasa and surrounding areas,” said Ange Asanzi, Africa programme assistant for environmental lobby groupInternational Rivers. DRC’s prime minister Matata Ponyo Mapon has said the Grand Inga will provide the country’s blue print for a better future. But on the world’s poorest continent, where natural wealth has largely failed to catalyse development, can projects like these lift people over the energy poverty line? “[The dams] will not solve the issue of energy poverty. Africa’s poorest live in rural areas. It is not cost effective to supply grid electricity to rural populations. Grid electricity is only cost effective in areas with a population density of at least 50 people per square meter,” Asanzi said. The International Energy Agency estimates that globally over 1.3 billion people cannot access electricity and 2.6 billion people are without clean cooking facilities. More than 95% of these people are either in sub-Saharan African or developing Asia and 84% are in rural areas. Rather than cut poverty, Asanzi argues that the project could potentially have a negative effect on communities. “People affected by Inga I and Inga II have never been compensated. Most of them will again be affected by Inga III. The resettlement action plan cites only five villages to be subjected to relocation, excluding many others.” The livelihoods of local communities are also at risk as the river is a major source of income for them. Kalua suggests this fear could morph into something bigger: “Huge volumes of water will be diverted. Drying rivers can lead to political unrest, since communities living downstream face the brunt of the reduction in volumes.” But the real elephant in the room is corruption. Inga I and Inga II were put up at a time of impunity among DRC’s political elite where there was little accountability regarding state expenditure. “Many politicians in DRC are still as driven by personal interests as they were 50 years ago,” says Asanzi. In a climate of mistrust and hope, Africa’s search for solutions to its energy deficit trudges on. Kenya and Ethiopia are betting on wind energy, while Ghana is banking on solar. South Africa is looking more and more towards importation. The need is great but experts remain cautious of the means employed to achieve a sustainable energy end. “As a continent we need to interrogate all these approaches that will result in an energy gain. We have to assess the environmental and humanitarian impact that these grand projects will have,” Kalua concludes. *Source theguardian]]>