Youth from local communities have been mobilising against the onslaught of Boko Haram in northern Nigeria. 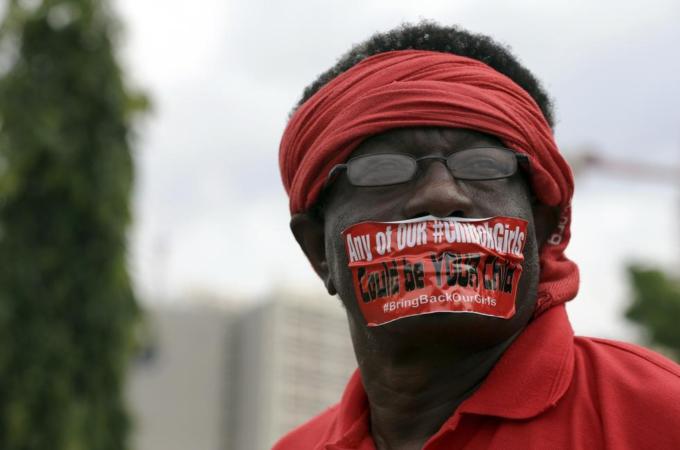 Boko Haram kidnapped more than 200 schoolgirls in April [Reuters][/caption]September 2014 marks five months since Boko Haram, a militant armed group in northern Nigeria, abducted over two hundred schoolgirls from Chibok, in Borno State. The Chibok girls, kidnapped on April 14, have not been rescued yet. This is despite efforts by the US, the UK, France, China and Israel to support Nigeria’s efforts to turn the tide of the insurgency and rescue the Chibok girls being held hostage in the forest of Sambisa.
Meanwhile Boko Haram has intensified its violent campaign to the point of threatening the territorial sovereignty and integrity of the Nigerian state. National security forces seem to lack the equipment, training and motivation to prevail over the sect. In the latest development, Boko Haram declared a caliphate in Gwoza, Borno State. The sect decimated the whole community, carrying out summary executions in the process, before hoisting their black and white flags at different locations. In a recent video, Abubakar Shekau, the leader of Boko Haram, said “[t]hanks to Allah who gave victory to our brothers in Gwoza’ which is now ‘part of the Islamic Caliphate.” Shekau declared that Gwoza now has “nothing to do with Nigeria”. The United Nations humanitarian office confirmed reportsthat Gwoza was under control of the militants and that the group had seized control of Damboa, which was earlier retaken by the Nigerian military. Boko Haram has also conquered other areas near Gwoza in Southern Borno, as well as large swathes of territory in northern Borno and portions of Buni Yadi in neighbouring Yobe State. In declaring a caliphate, Boko Haram becomes the first Islamist organisation in Africa to emulate the Islamic State group, which controls vast areas of eastern Syria and northern Iraq. The relentless attacks of Boko Haram have twice compelled a declaration of a state of emergency by fifteen local governments across four states in northern Nigeria. But such measures have failed woefully to stamp out Boko Haram; instead, they have strengthened the group’s resolve against the Nigerian state, its citizens, and Western missions. Community mobilisation An underreported but important aspect of the ongoing Boko Haram insurgency is the ways in which frustrated youths, armed with machetes and sticks, are mobilising against elements of the group in their communities, complementing the efforts of state security forces (including combat support and intelligence gathering) to contain Boko Haram. This pattern is evident across states in northern Nigeria, but particularly in Maiduguri, the largest city of Borno state, where angry vigilante youth groups (comprising some 500 youths) – known as “Civilian Joint Task Force” (CJTF) or “Yan Gora” – are tracking down Boko Haram members in their communities, whom they turn in to the state security forces or kill themselves. In Borno State, most CJTF members now receive $113 per month from the government. The relationship between the CJTF and state security forces have not always been cordial, with reported cases of police brutality against some youth vigilantes. In a recent protest, many angry youths took to the streets chanting anti-military slogans in Hausa: ‘sojoji ne Boko Haram, Soja oga-Boko Haram‘ (translation: soldiers are the real Boko Haram; soldiers are masters of Boko Haram). They were angry at soldiers who tried to shield five men who the vigilante group had arrested. The protest resulted in the death of at least two youths, as well as some injuries. Notably, the CJTF has recorded some measure of success against Boko Haram. In March 2014, members of the CJTF killed at least 207 Boko Haram militants who stormed a military barracks and a neighbourhood of Maiduguri. However, the CJTF has, itself, become a major target of Boko Haram’s attacks. Boko Haram killed at least 100 CJTF youths in 2013. While the state political leadership and local residents have commended the efforts of CJTF, with the Nigerian president referring to them as “new heroes of the nation”, there are growing concerns that these vigilante groups are “brewing trouble” which could transform into new militias if their activities are not regulated by the state. Some also fear that the actions of the CJTF are inciting Boko Haram to target civilians even more. To neutralise the current threat of Boko Haram, it is necessary to improve intelligence gathering among security agencies in Nigeria; national forces have to be proactive in nipping planned attacks in the bud before they are executed. Furthermore, this war cannot be won by the use of force alone. Urgent issues of unemployment and a sense of hopelessness among youth need to be addressed to prevent them from becoming easily manipulated by political and religious bigots. Moreover, besides military operations, there has not been any concrete ideological intervention to counter Boko Haram. As Ahmed Salkida argues, Boko Haram is a problem of doctrine that must be tackled through a “coherent, profound counter doctrine”. At the moment, there is a widespread feeling of insecurity among Nigerians, made worse by the recent outbreak of Ebola. These are certainly not good times to be a Nigerian. *Source Al Jazeera.Daniel Egiegba Agbiboa is a Cambridge and Oxford trained scholar in the field of International Development. He works as a Consultant for the African Union Commission (AUC) and Transparency International Defence and Security Programme, UK .
]]>