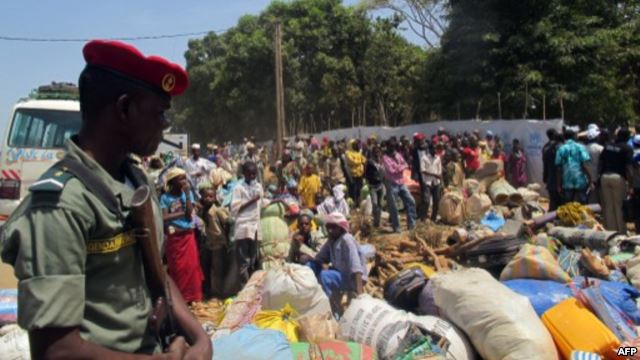 FILE – Refugees from Central Africa Republic wait for a food distribution at an UNHCR refugee camp in the eastern Cameroonian city of Garoua-Boulai, not far from the border with Central Africa Republic, March 13, 2014.[/caption] Cameroon’s government said it can no longer care for the nearly 300,000 refugees from Nigeria and the Central African Republic (CAR) who have fled violence in their countries and is asking they be moved to camps run by international aid agencies. As more Central Africans flee carnage in their country and Nigerians continue to escape Boko Haram terrorist attacks, Cameroon’s government said the refugees’ health, humanitarian and food needs have exceeded its capacity to cope. Minister of Territorial Administration Rene Emmanuel Sadi said he has instructed Cameroon’s 10 regional governors to make sure refugees go to camps where they can have follow up aid from the international community. Sadi said administrative authorities have been instructed to relocate all refugees from camps close to the borders with Nigeria and the Central African Republic. He said allowing these refugees to live in border villages with local Cameroon citizens is making it harder to control security as well as attend to food and medical needs. UN agency struggling Ndeye Ndiougue Ndour, the United Nations High Commissioner for Refugees UNHCR) representative to Cameroon, told VOA her organization is also struggling with the constant inflow of displaced people scattered all along the border. Ndour said 42,000 Nigerian refugees have crossed the borders in the last month alone and they are being asked to settle at a camp in Minawao, in northern Cameroon. She said the refugees need at least 20 more water wells on the site and they can only construct five. They also have contacted the United Nations Children’s Fund (UNICEF) to build latrines. Ndour said they have put up 100 tents that can house 500 people. Cameroon officials said, while refugees may prefer to live in border areas, doing so leaves both the refugees and Cameroon citizens more at risk of attacks by insurgents and putting them in unhealthy living conditions. Refugees to Minawao Sanusi Abdoul, a spokesperson for the Nigerian refugees, said they have accepted the move to the Minawao camp while they wait for the situation at home to improve. “I am very grateful to the president of Cameroon for doing this for us,” Abdoul said. “We are very grateful to the entire people of this town, too, for keeping us in a safe place with security, everything. We are very happy and we are now waiting for everything the government will do.” In July, Cameroon asked for international assistance as the number of refugees had doubled since January. Earlier this week, the United Nations Refugee Agency appealed for $34 million in donations to help Nigerians who had been forced to flee their homes because of Boko Haram attacks. Many of the Nigerian refugees have traveled to Cameroon. *Source VOA]]>