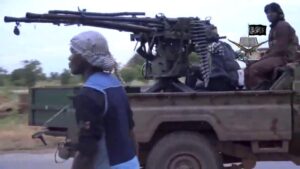 A screengrab taken on August 24, 2014 from a video released by the Nigerian Islamist extremist group Boko Haram shows alleged Boko Haram members at an undisclosed location (AFP Photo/)[/caption] Abuja (AFP) – Nigeria’s military on Friday accepted that it was facing an uphill battle to stem the tide of Boko Haram violence, calling the insurgency a threat to national sovereignty.

But it rejected claims that it was in denial about the seriousness of the threat after recent militant gains in the northeast that prompted fears that the government risked losing control.

The United States on Thursday voiced concern about deteriorating security, with the Islamists reportedly in charge of the town of Bama in Borno state, near the state capital Maiduguri.

“It is not only the pride and reputation of the military that is at stake but that of the entire nation,” defence spokesman General Chris Olukolade said in a statement.

“All steps are being taken to ensure the success of the counter-insurgency operations, especially at this crucial time when our sovereignty is being challenged,” he added.

US Assistant Secretary of State Linda Thomas-Greenfield on Thursday said the upsurge in violence was a “sober reality check” and warned that failing to confront it threatened Nigeria’s future.

“The reputation of Nigeria’s military is at stake,” she told a bilateral security meeting in Abuja. “We are past the time for denial and pride.”

Nigeria’s military high command has repeatedly denied that the insurgents have taken over northeastern towns and that hundreds of soldiers deserted their posts.

The military has also rejected as “empty” claims from Boko Haram’s leader, Abubakar Shekau, that the captured town of Gwoza, also in Borno, was now part of an Islamic caliphate.

In recent months there have been numerous reports that soldiers have refused to deploy to counter-attack Boko Haram. Troops have complained in particular that the insurgents are better armed.

Olukolade said military top brass were aware of the concern at home and abroad about the situation, but added: “Everything will be done to reverse the situation and defeat the rampaging terrorists.”

The military was “more than ever determined and committed to the defence of the sovereignty and territorial integrity of Nigeria” and was “willing and ready to perform its duties with utmost diligence”.

Afterwards, members said they were seeking a meeting with President Goodluck Jonathan about the current security situation, Nigerian media reported on Friday.

Nigeria, which has 80,000 armed service personnel on active service and 82,000 paramilitaries, has west Africa’s biggest military and, on paper, should be able to crush the insurgency. 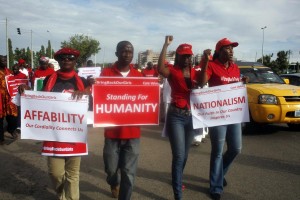 #Bring Back Our Girls” campaigners march during a rally calling for the release of the Abuja school girls who were abducted by the Boko Haram militants in Borno State August 22, 2014. Picture taken August 22, 2014. REUTERS/Stringer (NIGERIA – Tags: CIVIL UNREST POLITICS)[/caption]

Boko Haram’s ranks are thought to comprise 6,000 to 8,000 men, according to one estimate quoted in a research paper published this week by the Chatham House international affairs think-tank.

But defence analysts say that decades of mismanagement, corruption and wrong-headed procurement deals have combined to weaken the military’s capacity to be an effective fighting force.

Boko Haram has been blamed for more than 10,000 deaths since 2009, but the scale of their attacks appears to have escalated in recent months.

In Maiduguri, where thousands of people from across Borno have sought sanctuary from the violence, Borno State Governor Kashim Shettima appealed to residents to unite to defeat Boko Haram.

Civilian vigilantes pushed out the militants from the city in 2013 when a state of emergency was declared but their arrival in Bama, 70 kilometres (45 miles) of the city, has once again raised fears.

Shettima condemned the killings of innocent men, women and children across the state but vowed that they “will not succeed, Inshallah (God willing)”.

“Let me reassure the good people of Borno State that measures have been taken by the federal government based on information available to us,” he said in a state-wide broadcast.

“With these steps and our combined efforts as state government and resilient people, we shall overcome this tribulation.”