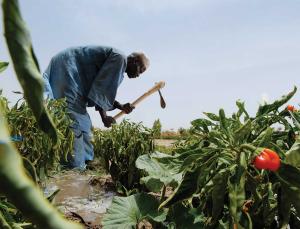 “IT’S like having a new life,” says Lucy Banda, a farmer in Mwambaso village in western Malawi. Over the past three years she has trebled her farm’s output and increased her income 15-fold (see “A life transformed“).

Banda is one of 1.75 million African smallholder farmers, 40 per cent of them women, enrolled in a $180-million five-year programme run by the Alliance for a Green Revolution in Africa. AGRA was set up in 2006 by the Bill and Melinda Gates Foundation and the Rockefeller Foundation.

Now, its latest report says the scheme is achieving its aims. Flagship projects in Tanzania and Malawi have each recruited 18,000 farmers, while in Ghana 117,000 have signed up. On average their farms’ yields have doubled (see chart below). From these initial three countries, the programme has expanded to 18.

“We hope by 2015 to have reached 20 million smallholders,” says Bashir Jamaof AGRA, who runs the organisation’s soil health programme. 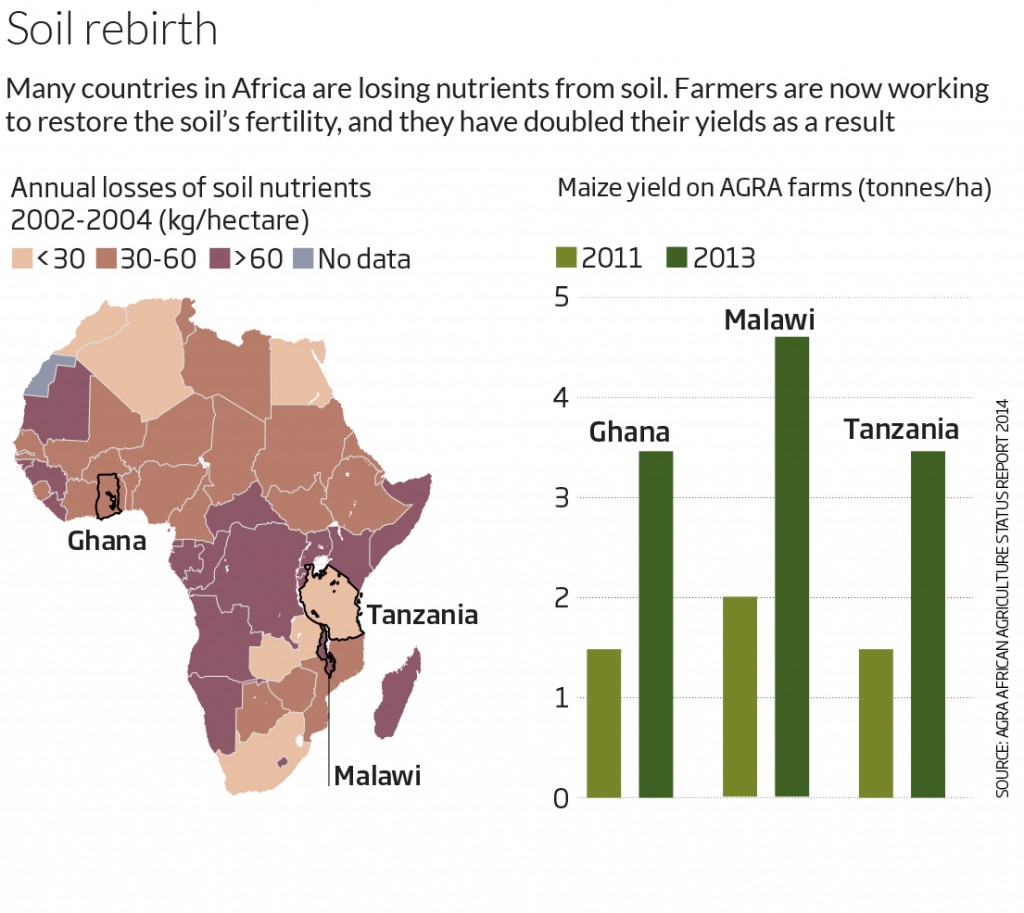 Farmers’ groups, agriculture ministers, scientists and financiers met this week at the African Green Revolution Forum in Addis Ababa, Ethiopia. Expanding the AGRA scheme was set to be high on the agenda, Jama says. New Scientist went to press before the meeting finished.

Africa’s farmers have a lot of problems, but one of the biggest is poor soil. Cost and bad infrastructure have long prevented farmers from fertilising their fields, so many African countries have been losing nutrients from their soils (see map above). The AGRA project is the most concerted effort yet to fix the problem. Its soil health programme has set up 9000 dealers within 5 kilometres of farmers to sell them the supplies they need.

The first necessity is fertiliser. Thanks to the dealers, AGRA farmers now use 10 to 50 kilograms of fertiliser per hectare, and though this is just a tenth to a quarter of what farmers use in rich countries, it is still a big improvement. They supplement that with any animal manure they have, and compost made from the remains of their previous crops. AGRA has also appointed 2800 inspectors to monitor soil health and advise farmers on how much fertiliser they need.

The dealers also supply the seeds for legumes like soybeans and pigeon peas, which make their own fertiliser from nitrogen in the air, via bacteria in their root nodules. This process is made more efficient by inoculating the seeds with the bacteria.

The other major problem AGRA is aiming to solve is lack of infrastructure. African smallholders are often isolated, unable to get credit or find buyers for their produce.

So AGRA is putting farmers in touch with everyone from financiers who offer microcredit to agents who buy produce for sale elsewhere. “We’re connecting [smallholders] to the entire business chain,” says Jama.

Groups of 15 to 25 smallholders are also being encouraged to form collectives. AGRA has provided advice and expertise for 155 such groups in Ghana alone. They give farmers more bargaining power and allows them to jointly fund communal assets, such as secure storehouses.

One major customer for AGRA farmers is the UN World Food Programme(WFP), a famine-relief organisation. In 2008 it launched a programme calledPurchase for Progress (P4P) that targets smallholder suppliers, including those in 15 African countries. “We already buy 80 per cent of our produce from developing countries, but those that bid for the contracts are usually the larger companies and farms,” says Ahnna Gudmunds, the scheme’s advocacy officer. P4P aims to “link the smallholder farmers explicitly into the process”.

AGRA farms are key suppliers, says Gudmunds. The WFP has bought 450,000 tonnes of food, worth $177 million, and the scheme is set to continue.

The threat of climate change means smallholders must keep adapting if they are to survive and prosper, says Guei. AGRA’s methods are one way to do so.

The risk is large. A new report from AGRA says climate change could increase the number of malnourished people in sub-Saharan Africa from 223 million today to 355 million in 2050. Less rain will be a major factor. “We’re predicting a decline of 20 to 40 per cent in rainfall across West Africa,” says David Sarfo Ameyaw of AGRA. Rising temperatures could also shrink by up to 80 per cent the areas where beans will grow.

For their part, governments must improve water storage and create drought-resistant crops. In 2006, African governments pledged to inject 10 per cent of their spending into agriculture, says Ameyaw. “So far, only eight of 54 countries have done so.”

“The vision is to produce more efficiently, but to be aware that climate change is happening, and that we must use all best practices to allow farmers to adapt,” says Guei.