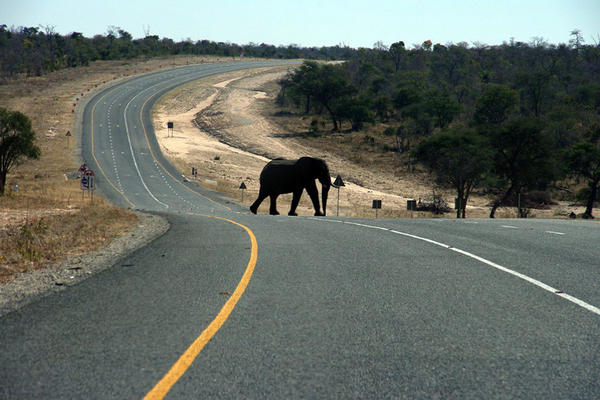 An elephants crosses the main highway leading to Zambia in Northern Botswana, in July.[/caption] Sudanese billionaire Mo Ibrahim has a simple answer to that question: Yes. “Anyone who wants a true grasp of African realities must reject the ‘one-size-fits-all’ attitude,” he writes in the introduction to his annual Ibrahim Index of African Governance, a respected ranking of progress and stability of African states. Indeed, the 2014 index, released today, reveals a staggering diversity of competence and capability across more than 50 different governments, evaluated in areas ranging from economic and human development, to human rights, safety, and the rule of law. Overall, the news is good: Governments are performing better than a decade ago. But the gains are very uneven. There’s the Africa of the tiny island of Mauritius, Ibrahim’s top-ranked nation, which has posted growth rates of 5 percent annually for three decades, and of Botswana, one of few African countries to transform its mineral wealth into political stability and widespread gains for its citizens. But there’s also the Africa of Somalia, Eritrea, and the Central African Republic – poor, repressive, and roiled by political violence. And there is everything in between. Nigeria, Africa’s most populous country and its largest economy, ranks 37th among 52 indexed nations, partly because of its security crisis over extremist groups. Two countries (Sudan and South Sudan) weren’t ranked at all. Not to be overlooked are mid-ranked nations like Niger that have implemented significant changes. Vast and sparsely populated, Niger rose from 38th  five years ago to 29th  today, largely as a result of political stability since a 2010 coup. The nation is known mainly for cyclical droughts and chronic famine, but has made news for ambitious security initiatives, including efforts to combat extremism along its border with Mali and a growing military alliance with the US, which now flies surveillance drones from the capital, Niamey. Other post-crisis countries of note are Guinea, Ivory Coast, and Zimbabwe, which have “improved tremendously and in a way that’s very encouraging,” says Festus Mogae, the former president of Botswana. Mr. Mogae says it is encouraging that low-ranked countries “are capable of doing better.” Yet northern African nations like Egypt and Libya have seen their ranking slide steadily downward over the last five years as regime change and civil unrest have undone their previous political stability.  Egypt fell from 12th to 26th  and Libya from 26th to 42nd.  Meaningful trends The rankings are based on four categories of high-functioning states: safety and rule of law, human rights and participation, economic opportunity, and human development. In the past five years the greatest gains in Africa are in human rights and human development; but more than half of African countries are regressing in safety and rule of law over the same period. “Of course, there’s no such thing as a totally accurate index, but I think these trends are meaningful,” says Lord Simon Cairns, a British businessman and member of the Mo Ibrahim Foundation board. “The purpose of the whole exercise is to provide civil society with the tools to question their governments and make demands on behalf of their citizens.” Ibrahim is also the face behind the Mo Ibrahim Prize, a $5 million award offered annually to a democratically elected African head of state for “excellence in office” and who has stepped down within the past three years. The prize has only been awarded three times since 2007. Mogae, the former president of Botswana, is the 2008 winner. The 2014 winner – if there is one – will be announced at the end of this year. *Source csmonitor]]>