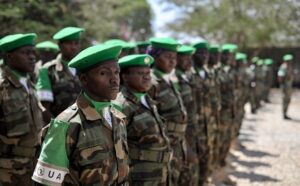 The Commission of the African Union (AU) is concerned by the report entitled “The Power These Men Have Over Us: Sexual Exploitation and Abuse (SEA) by African Union Forces in Somalia”, issued today by Human Rights Watch (HRW). The Commission takes note of the allegations contained therein. These allegations will be thoroughly investigated, and appropriate measures will be taken if they are found to be true, through the relevant mechanisms that have been developed by the AU to prevent and respond to issues of misconduct and abuse in peace support operations, in accordance with the AU’s zero-tolerance policy on this matter.

The Commission would also like to emphasize that these allegations do not define the character, organizational culture and management of the AU Mission in Somalia (AMISOM), currently one of the largest peace support operations in the world. Accordingly, the portrayal of the Mission and the general conclusions drawn from the allegations against it, as reflected in the title of the HRW report, constitute a misrepresentation of the sacrifices, achievements and genuine commitment of AMISOM and the Troop and Police Contributing Countries (TCCs/PCCs), in support of the people and the Federal Government of Somalia in their quest for sustainable peace, security, stability and reconciliation. In 2014 alone, AMISOM recovered more than 14 new areas from the Al-Qaeda-linked terrorist group Al Shaabab, and opened up Main Supply Routes (MSRs) for the delivery of humanitarian assistance to areas that had been unreachable by humanitarian agencies for extended periods of time.

The Commission notes with deep concern the imbalance, inaccuracies and partial view contained in the HRW report. In this respect, the Commission would like to highlight the following points:

(i) Firstly, the HRW report uses a small number of cases to arrive at a generalized conclusion. The HRW report claims that it has documented 21 alleged cases of sexual exploitation and rape. It further states that a single soldier carried out most of these acts. The generalization contained in the report does not reflect the highest professional standards with which the overwhelming majority of AMISOM uniformed personnel have continued to discharge their responsibilities.

(ii) Secondly, it is contradictory that the HRW makes sweeping general assertions about AMISOM culpability yet admits that its research did not exhaustively interrogate the scale and prevalence of these allegations. Furthermore, it would have been extremely helpful for HRW to present, even if in confidence, important facts and evidence to the senior leadership of the AU Commission and indeed to AMISOM, who would then have been in a position to conduct an in-depth investigation into this matter. This request was made by AMISOM in a letter to HRW on 3 June 2014, and there was an opportunity to fulfill this request during a meeting between the AU Commission and HRW on 5 September 2014. HRW’s failure to engage constructively with AMISOM and the AU Commission regarding the disclosure of evidence of wrongdoing, despite the AU’s willingness to do so, undermines the spirit of cooperation that would ensure the prevention and response to such allegations, in an effective manner.

(iii) Thirdly, the HRW report lacks coherence in its account of AU’s efforts to prevent and respond to SEA allegations in the Mission area. On one hand, the report argues that AMISOM leadership overlooks allegations of sexual misconduct. On the other hand, it makes mention of ongoing efforts to tackle allegations by citing the case of the deployment of a Ugandan Divisional Court Martial within Somalia to deal with SEA allegations. The HRW report also alludes to the fact that a Ugandan soldier is facing a court martial in Uganda for a sexual offence committed while serving in Somalia.

The Commission also notes with regret the factual inaccuracies of some of the claims made in this report. For instance, the HRW report states that all AMISOM staff, including locally-recruited Somalis, are immune from prosecution for criminal acts committed in their official capacity and that, as such, no action is taken against alleged perpetrators of rape and SEA. In this regard, the AU would like to stress that immunity is conferred only with regard to civil matters involving AMISOM personnel, including AMISOM national staff. The Commission takes strong exception to the insinuation that persons allegedly involved in SEA and rape are afforded official protection for such crimes. The HRW report ignores tools and mechanisms such as the Status of Mission Agreement (SOMA) signed between the AU Commission and the Somali Government and the Memorandum of Understanding (MoU) signed between the AU and TCCs/PCCs that contain provisions that address issues relating to transgressions.

The 2012 Report by an Independent Panel of Expert on the situation of human rights in Somalia, which was constituted by the United Nations (UN) Human Rights Council in Geneva, departs from the assessment and conclusions of the HRW report regarding AMISOM compliance with the UN Human Rights Due Diligence Policy. Specifically, the Experts’ report notes that “Regular training of AMISOM forces on humanitarian and human rights laws had yielded positive results, including in regard to the prevention of conflict-related sexual violence” (A/ HRC/21/61, 13 August 2012, paragraph 20).

The Commission would like to use this opportunity to re-iterate that internal mechanisms have been established to prevent, mitigate and discipline personnel that may have committed sexual exploitation and abuse in AMISOM and in other AU’s peace operations. These preventive measures include pre-deployment training for all AMISOM uniformed personnel before their deployment into the Mission area. Robust training packages cover SEA, gender-based violence, obligations with regard to International Humanitarian Law, International Human Rights Law and International Refugee Law, amongst others. Such training also includes AMISOM Military Rules of Engagement and Police Guidelines on Use of Firearms as they relate to women, children and other vulnerable groups. This training is conducted in conjunction with the United Nations.

Other preventive measures include: release of Force Commander’s Directive on Conduct of Military Actions; in-Mission refresher training covering the same subjects and/or recent developments on the same; establishment of Gender Focal Points in the various contingents; development of a conduct and discipline capacity in the Peace Support Operations Division of the Peace and Security Department of the Commission; and the strengthening of AMISOM Human Rights, Protection and Gender Unit.

AMISOM has also established mitigating measures such as the institution of a Board of Inquiry (BoI), at both contingent and headquarters levels, and the establishment of a Disciplinary Board, especially where there are alleged cases of sexual harassment by AMISOM national and internationally recruited personnel.

These existing mechanisms are being enhanced further to ensure greater effectiveness and accountability. In this respect, the Commission welcomes some of the HRW recommendations that could be considered as part of AU’s efforts to strengthen existing mechanisms. The introduction of in-country divisional Court Martials in Somalia by all TCCs/PCCs, finalization of the SEA policy document and enhanced information sharing between the TCCs and the AU Commission on prosecutions will be given due consideration.

The Commission wishes to reiterate its appreciation to all the TCCs/PCCs, as well as to the AMISOM civilian personnel and leadership, for their huge sacrifices and unwavering commitment to support the FGS and other Somali stakeholders, in their efforts to bring about lasting peace, security, stability and reconciliation in Somalia.