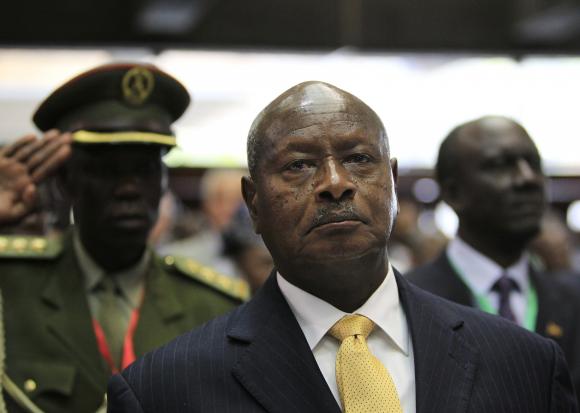 Uganda’s President Yoweri Museveni arrives to attend the Africa Union Peace and Security Council Summit on Terrorism at the Kenyatta International Convention Centre in Nairobi, September 2, 2014.
Credit: Reuters/Noor Khamis[/caption] African leaders proposed on Tuesday creating a special fund to combat Islamist militant groups growing in strength from Kenya to Nigeria. African Union (AU) states announced the idea after Nairobi talks on a problem highlighted on Tuesday by capture of a town in north-eastern Nigeria by Boko Haram militants. Fighting killed scores of people, according to security forces, and sent at least 5,000 fleeing. A senior European Union official also told the summit that Islamic State’s gains in Iraq and Syria, where it controls vast swathes of territory, could help set off a competition between it and al Qaeda to become the leading Islamist militant group in Africa. President Uhuru Kenyatta of Kenya, where al Shabaab gunmen last September killed 67 people in a raid on a shopping mall, said African countries should stand together against the threat of Boko Haram and al Shabaab. “No single state can tackle this threat alone,” he said. “It is particularly worrying in Africa today that terrorist organizations have grown both in terms of number and capability.” Chad President Idriss Deby, who is chairperson of the AU Peace and Security Council, said: “There is a proposal to establish a special fund to combat terrorism.” But Deby, flanked by Kenyatta and Nigerian President Goodluck Jonathan at a news conference, gave no details about who would contribute to the fund or how the money would be used. Swathes of Africa has been ravaged by Islamist insurgencies, with the likes of Boko Haram launching attacks in Nigeria and Cameroon, while Somalia’s al Qaeda-linked al Shabaab rebels have struck at targets in Kenya and Uganda.   http://www.youtube.com/watch?v=nIv1dBhu4xs The idea of the fund was mooted by Kenyan President Uhuru Kenyatta and would be discussed at the next full AU summit. Kenyatta said African states would have to increase their own spending on security to curb the organized militant groups. Many African countries, including Kenya and Nigeria, are key Western allies in the global fight against Islamist militants and their security services receive substantial training and support from the United States, Britain and other donors. The United States has said it is assessing whether al Shabaab leader Ahmed Abdi Godane was killed in a U.S. airstrike in Somalia on Monday. Saudi Arabia said it would contribute $10 million to the AU to fight militant groups which have often taken advantage of porous borders and inept police forces across the continent.   RIVALRY The wealth and military might of Islamic State militants have led the United States and others to view it as a threat capable of surpassing that once posed by al Qaeda, which is seen as hobbled since the 2011 killing of its founder Osama bin Laden. African intelligence officials have said that they are concerned that Islamists may be emboldened by the Islamic State’s gains in the Middle East. Gilles de Kerchove, the European Union’s counter-terrorism coordinator, said the Islamic State’s strength could attract African Islamist militants in search of funding and training. “It’s not only that ISIS might provide more money or resources,” Kerchove said. The two groups might also engage in a “competition for the leadership,” with al Qaeda using Africa as a staging ground to remain relevant. “It’s a concern. I’m not saying it will happen,” he said. *Source Reuters  ]]>