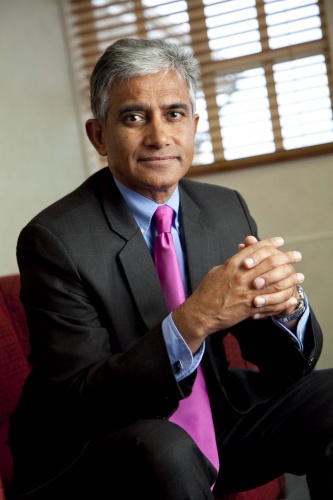 Suresh Kana, PwC Africa Senior Partner[/caption] CEOs in Africa are optimistic about their company’s prospects for revenue growth over the medium term, according to PwC’s ‘Africa Business Agenda, 2014′ report issued today (http://www.pwc.com). Suresh Kana, Senior Partner for PwC Africa, says: “CEOs in Africa feel more positive about their ability to generate revenue growth and about prospects for the economy now that they are emerging from the global financial recession.”

“It is interesting to note however that CEOs are slightly more anxious about their prospects for growth over the short-term,” adds Kana. Although 84% remain confident overall, only 40% say they are ‘very confident’. “CEOs acknowledge that a lot more needs to be done in terms of transforming the continent’s potential for exponential growth into tangible business opportunities,” he says. “CEOs are looking on multiple fronts for growth opportunities – for many, the search for growth will not be an easy task.”

‘The Agenda’ compiles results from 260 CEOs in Africa and includes insights from business and public sector leaders from 18 countries. The report shows that most CEOs in Africa feel confident about their approach to managing risk, despite some volatility and uncertainty.

The pace of change in the world is speeding up with a series of transitions, known as global megatrends that will transform business and society. African CEOs rank technological advances (69%), urbanisation (67%) and demographic shifts (63%) as the top three defining trends that will transform their businesses over the next five years. They are aware of the implications of these changes for their businesses, as well as the outlook for Africa. Many have recognised the need for change or are making changes to their businesses.

“Every day breakthroughs in frontiers of research and development are opening up new opportunities for businesses. As technologies progress, they will generate more improvements in efficiency and productivity. In turn, these advances are expected to trigger a strong acceleration in economic growth towards the end of the coming decade,” comments Kana.

Confidence is on the rise among Africa’s CEOs. In general, they are more confident about their own company’s growth than they are about their industry’s prospects. While less than half are ‘very confident’ about their company’s growth prospects in the short term, less than a third (26%) are ‘very confident’ about industry growth. CEOs in Africa say that their desire to create something is what drives their organisation’s strategic planning. They rank products/service innovation (31%), increased share in existing markets (27%), followed by new geographic markets (20%) as opportunities for growth but are equally concerned about shifts in consumer spending and behaviours.

Going forward, African CEOs say that they will be more actively looking for partners, while keeping an eye on costs. Almost half of them plan to initiate a new strategic alliance or joint venture in the next 12 months, and nearly a third are anticipating an acquisition, mainly in their home country or elsewhere in Africa. China is emerging as a key for consideration for growth prospects, followed by the US and South Africa, respectively. This is an indication of overall better economic prospects, higher availability of finance, and the growing presence of potential local and international partners attracted by the continent’s potential.

“We are also seeing more use of technological innovation and products, with no less than 91% of African CEOs either recognising the need to change their investments or in the process of doing so. Similarly, 85% said the same about data analytics,” says Kana. Following a decade of rapid urbanisation, Africa is undergoing a digital revolution. However, there are still many hurdles and obstacles to overcome to the development of digital economy on the continent – and many of these hurdles are related to the development of a stable political and legal environment for companies, citizens and investors.

Infrastructure is important in driving economic growth and employment on the continent. However, 45% of African CEOs believe that their governments have been ineffective in improving the country’s basic infrastructure, such as electricity, water supply, transport and housing.  CEOs also identified the creation of a skilled workforce (64%), the reduction of poverty and inequality (62%), and creating more jobs for young people (74%) as areas in which governments should be taking more decisive action and creating a business-friendly environment.

“In our view, one of the big challenges is for government to find new ways to form strategic collaborations and partnerships with people from other sectors, such as business. Tomorrow’s public body will need to act differently – governments of the future will need to embrace a lot of private-public partnerships.”

The report shows that for CEOs in Africa, government responses to over-regulation (80%), exchange rate volatility (79%) the fiscal deficit and debt burdens (78%) and adequate infrastructure are key areas of concern, and that governments have their work cut out for them. Other areas of concern are the increasing tax burden, slow or negative growth in developed economies (70%) and the lack of stability in capital markets (65%). But the report does show that 45% of CEOs say that governments have effectively achieved the outcome of ensuring financial sector stability and access to affordable capital.

Kana says that CEOs in South Africa share many of the concerns with their peers on the continent, with the survey showing that they have common worries about high or volatile energy costs (South Africa: 82%, Africa 76%); the availability of key skills (South Africa: 87%; Africa 83%); and new market entrants (South Africa: 63%; Africa: 58%).

Most companies in Africa have some degree of risk management in place. The report shows that 31% of respondents have implemented plans to manage risk more effectively and 37% are strengthening their corporate governance structure. To prevent fraud, many CEOs in Africa are focused on supply chain management. For 83% of CEOs in Africa, bribery and corruption is a significant and frustrating threat to business growth.

As governments make strides worldwide to improve their fiscal systems, more than half of African CEOs (53%) say the international tax system hasn’t changed to reflect the way multinationals do business today and is in need of reform. Just 32% of CEOs said their government had been effective in creating a more internationally competitive and efficient tax system.

CEOs globally remain concerned as ever about the availability of key skills. The survey shows that nowhere is the shortage of skills more acute than in fast-growing markets such as Africa, where CEOs are particularly concerned about skills shortages (83%). Most CEOs expect to maintain or increase their company’s headcount over the next 12 months.

Furthermore, the competitive market for top talent influences compensation, with many companies under significant pressure to match or exceed pay conditions among peer companies to recruit or retain top talent.

“Africa is a complex and diverse continent. Doing business on the continent can be a daunting experience for any organisation as they are faced with a myriad of uncertainties and challenges in different political, economic and legal environments.

“Notwithstanding the difficulties and challenges ahead, many African organisations have learnt to brace themselves and adapt quickly, overcoming many of these challenges, including mitigating the risks – and turning Africa into the next frontier of growth,” concludes Kana.