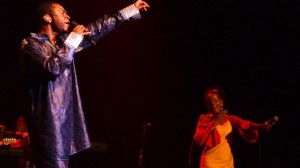 Youssour Ndour sings for peace in Central Africa[/caption] Terror and extremism don’t respect borders anymore. Times are desperate and musicians are lending their voices to peace. THIS week, African leaders are in Nairobi, Kenya to discuss how to tackle terrorism and extremism across the continent, a follow-up to another held in Pretoria, South Africa, in May. A regional strategy to fight terror has become particularly important as conflict in Africa rarely respects national borders and territorial sovereignty (READ: They are Africa’s rebels without borders). As the menace grows, so is the army working for peace and tolerance – writers, musicians, and activists. Here is an update of ongoing conflict situations in Africa, and those African leaders are watching closely, should tensions escalate. EGYPT: Sinai-based militant group Ansar Bayt al-Maqdis last week beheaded four Egyptians, accusing them of providing Israel with intelligence for an airstrike that killed three of its fighters. CAMEROON: Nigerian terror group Boko Haram intensified attacks in Cameroon’s far north, with at least 18 dead and 21 kidnapped in the past month. Amid renewal of violence, authorities mid-last month reorganised the security apparatus in the far north, and established a special force against terrorism. CENTRAL AFRICAN REPUBLIC (CAR): A July ceasefire agreement has not been implemented, and there have been repeated clashes throughout the month, with at least 40 civilians killed in August. CHAD: French counterterrorism operation “Barkhane” was launched at the beginning of August, and border patrols have been reinforced against increasing Boko Haram threat. 85 Nigerian hostages abducted by Boko Haram early August from Doro Baga in Nigeria were rescued on 16 August by Chadian border patrol. DR CONGO: The country is trying to disarm its many rebel groups in the east, particularly the FDLR. The region is also closely watching the M23 rebel group which was driven out of eastern DRC late last year, but is now believed to be quietly reorganising in Rwanda and Uganda. KENYA: Suspected al-Shabab militia continue to wreak havoc in the northeast and at the coast, with an attack at Fino police station in the north east. Four people were kidnapped by gunmen in Lamu East in August, three were later released and one killed. The curfew period in the area has been extended to September. LIBYA: Libya’s main international airport fell into the hands of Islamist militia the Libyan Dawn coalition, following weeks of heavy fighting. Tripoli International Airport on fell to the rebels on 23 August; it had been shut since 13 July amid clashes between the Libyan Dawn Islamists and a rival militia. MOZAMBIQUE: Government and RENAMO signed a ceasefire agreement on 24 August; paving way for amnesty for RENAMO militants and integration into security forces. RENAMO leader Afonso Dlhakama is expected to leave Gorongosa hideout to meet President Guebuza on 5 September. MALI: French army officially launched anti-terrorism Operation “Bharkane” in Sahel on 1 August, and on the 10th launched airstrike on extremist groups around Essakane and arrested suspected jihadis near Timbuktu. Jihadi Ansar Dine leader Iyad Ag Ghali expressed support for al-Qaeda in the Islamic Maghreb in a Youtube video on 5 August, threatening attacks on French “crusaders”. Two UN peacekeepers were killed and four wounded in jihadi suicide attack on Ber camp on 16 August. NIGERIA: Clashes between Nigerian military and Boko Haram continued in northeast. Boko Haram invaded Gwoza on 5 August, killing 100 and burning government buildings and churches; 10 August attacked Doro Baga, killing 20 and abducting some 100. The Nigerian military reported the recapture of four towns on 8th August, and a week later reported over 50 insurgents and 30 soldiers killed in battles around Pilka, Kirawa and Gwoza. 480 Nigerian soldiers outgunned by Boko Haram on 24 August crossed into Cameroon; authorities the following day claimed it was a “tactical manoeuvre”. Boko Haram leader Abubakar Shekau declared the creation of Islamic caliphate in Gwoza on 24 August. There are reportedly 650,000 displaced in northeast, an increase of 200,000 since May. SOMALIA: Al-Shabab seems to have gone into full offensive mode recently, with widespread clashes between the terror group and African Union (Amisom) soldiers in Mogadishu and southern Somalia. Clan violence has also intensified in the past month. 13 were killed  on 15 August in a Somali federal government/ Amisom raid to disarm Mogadishu militia loyal to former Wadajir district commissioner Ahmed Adow “Dai”. SOUTH SUDAN: Warring parties missed the 10 August deadline for the formation of a transitional government, fresh fighting erupted on 15 August in Unity and Jonglei states. A UN aid chief has warned of famine if violence continues. SUDAN: Darfur is in the news again, with clashes over land and cattle in East Darfur between the Rezeigat and Ma’aliya ethnic groups reportedly leaving over 300 dead. *Source M & G]]>