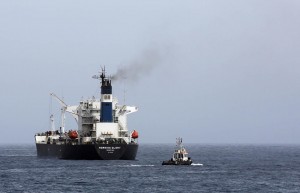 An oil tanker during the unloading of oil in the Libyan sea port of Zawiya on April 4, 2014 (AFP Photo/Mahmud Turkia)[/caption]

Johannesburg (AFP) – Africa’s energy industry could boom in the coming years, with Mozambique and Tanzania set to emerge as new frontiers if they can attract enough badly needed investment, a report said Wednesday.

Six of the top 10 global discoveries in 2013 were made in Africa, with more than 500 companies now exploring across to the continent, according to a study by PriceWaterhouseCoopers.

Large gas finds in Mozambique and Tanzania would make the world “take note of east Africa as an emerging player in the global industry,” said the report’s advisory leader, Chris Bredenhann.

The boom has brought investment opportunities, despite the lingering challenges of corruption, lack of infrastructure and regulation.

Transactions worth some $1 billion (760 million euros) occurred every 17 days in Africa’s oil and sector last year, the report said.

Still, the continent faces fierce competition for vital investment from other parts of the world, the PWC report cautioned.

“A huge obstacle to growth in Tanzania and Mozambique is the cost of the infrastructure required, which neither country can afford without help from foreign investors,” it said.

Nearly nine million barrels of crude were produced every day in 2013, more than 80 percent of which came from established players such as Nigeria, Libya, Algeria, Egypt and Angola.

In gas that is even more concentrated, with nine tenths of annual natural gas production of 6.5 trillion cubic feet coming from Nigeria, Libya, Algeria and Egypt.

Still, Mozambique could become a major player in the Asian market on a par with Australia, the United States and Papua New Guinea when it starts exporting gas, expected in 2020, the report said.

Already majors such as Eni, Chevron and BP have invested in its gas fields, some of the largest discovered in the past decade.

Demand for oil in Africa was also expected to “rise significantly” over the next 20 years, driven by population growth, urbanisation and the emergence of a middle class, the report said.