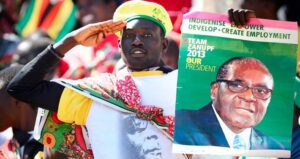 Indigenisation is the elephant in the room. Photo©Alexander Joe/AFP[/caption] Politics and economics clash as the need for investment weighs heavily. There are fresh skirmishes within the ruling Zimbabwe African National Union-Patriotic Front (ZANU-PF) over who will succeed nonagenarian president Robert Mugabe. The issue has resurfaced ahead of the party’s elective congress in December, when insiders predict that Mugabe will stand down as party president and nominate his successor, in consultation with close allies. That would enable him to resolve the rivalries that are distracting ZANU-PF without giving up the national presidency. Until now, Mugabe has played rival factions – one led by vice-president Joice Mujuru and the other by justice minister Emmerson Mnangagwa – against each other. Then, at the burial of veteran politician Nathan Shamuyarira in June, Mugabe lashed out at Jonathan Moyo, Mnangagwa’s ally and information minister, calling him a “weevil”. Topping the list of critical issues is President Mugabe’s promise to create more than two million jobs in his re-election campaign last year. In fact, more than 300 companies have closed since last year’s disputed elections, according to Tapiwa Mashakada, an economist who is also the acting secretary general of the Movement for Democratic Change (MDC) opposition party. Civil servants’ loyalties are being tested too as the government struggles to pay the public sector wage bill of $115m per month. Salaries are often in arrears, and most state employees’ wages are below the poverty line, pegged at $511 per month for a family of five. Finance minister Patrick Chinamasa has sounded his own warning bells about the cash crisis, arguing that the government must seek new loans from the World Bank and the IMF. “We have a debt overhang of $9.9bn, but we do not have any money to service our debt. What we are doing is engaging those institutions that we owe money [to] so that they can finance our long-term projects,” he says. The foreign debt “is an inhibiting factor in securing fresh lines of credit,” he concedes. Like his predecessor, Chinamasa complains that diamond proceeds are not reaching the treasury. Foreign billions on the horizon Foreign cash is on the way, according to Zimbabwe Investment Authority board chairman Nigel Chanakira. He reckons Zimbabwe could bring in as much as $2bn by 2015. “The elephant in the room is indigenisation […] Once the authorities complete the proposed review, we should process more investment,” says Chanakira. Finance minister Chinamasa echoes that sentiment and warns: “We don’t need to do silly things that scare away investors.” Former finance minister Tendai Biti, who has fallen out with MDC leader Morgan Tsvangirai, wants a new government: “The country should be led by a national transitional and technical authority to revive the economy while politicians deal with preparations for the next elections.” Ibbo Mandaza, director of the SAPES Trust think tank, concurs: “This country urgently requires a leadership change for it to go forward.” But President Mugabe has an improbable supporter in the shape of Aldo Dell’Ariccia, the European Union (EU) ambassador to Harare: “If there was a leadership crisis, there would be chaos. We still have a leader who manages to keep at bay these forces that are very much contradictory,” he told journalists and civic activists in Harare in June, urging them to be more constructive in their approach to the government. ● * Source Africa Report]]>