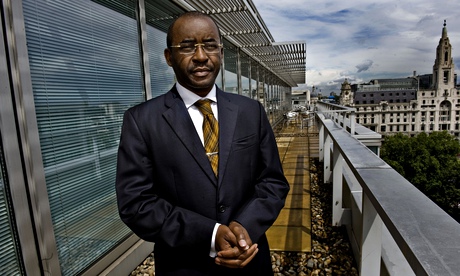 Strive Masiyiwa, CEO of Econet Wireless. Photograph: Sarah Lee for the Guardian[/caption] Will Zimbabwe be Africa’s first cashless society? Telecommunications company, and now mobile banking service, Econet Wireless predicts that in less than 12 months notes and coins will be long-gone from this southern African country. “We do not expect anyone to still be using paper money in a year’s time,” the company’s CEO Douglas Mboweni recently said. “It will be just like Europe or America, where you no longer see people carrying bundles of cash.” The collapse of Zimbabwe’s economy in 2002 paved the way for Econet Wireless’s mobile payment system. “Hyperinflation had destroyed people’s confidence in financial institutions,” said the Zimbabwe company’s founder, Strive Masiyiwa, at the Mastercard Foundation Symposium on Financial Inclusion in July. “The lowest denomination circulating was $1,” Masiyiwa said. “If you want to buy a packet of sweets for your child, you can’t get change.” The company set up a mobile payment system that handles small amounts and allows people to save as little as $1. “Today 43% of the GDP moves through Econet Wireless,” he concludes. Masiyiwa was born in Zimbabawe (then Rhodesia) in 1961. He and his parents fled the country in the turmoil after prime minister Ian Smith declared independence in 1965, settling in Zambia. His parents, who ran their own business, could afford to send Masiyiwa to school in Scotland when he was 12. After school he studied electronic engineering at the University of Wales and worked briefly for a computer company in Cambridge before returning to Zimbabwe in the early 1980s. Econet Wireless was established in 1998, but not before a fight. Masiyiwa waged a five-year legal battle with the government for a licence to deliver telephone services. The company now operates in 17 countries including Botswana, Lesotho, Kenya, Nigeria, South Africa and New Zealand. In 2000, while the UN filed a civil suit against Mugabe, Masiyiwa moved his family and company headquarters to South Africa. Econet Wireless first developed mobile payments to help NGOs transfer money to refugees after the war in Burundi ended in 2005. “Donor agencies were trying to find ways to make cash disbursements to refugees,” says Masiyiwa. “So we built the payment system initially not as a business but as a way to help humanitarians get money to people in rural areas who were trying to re-establish their lives.” That model was extended and now mobile money transfers are central to Econet Wireless’s business. Like M-Pesa before it, the company blurs the lines between telecomms and banking. Masiyiwa is passionate about this latter part of his business. He believes that extending saving and credit services to the poorest people gives them “extraordinary dignity and a sense that they are in control of their own lives”. His next challenge is to create a product that allows people who are informally employed, such as smallholder farmers and casual workers, to access credit. “In Africa 70% of people are informally employed,” he says. “The big frontier for us is to create platforms where those people can access credit.” He says there’s no risk that they will get into unmanageable debt because the banks won’t extend excessive credit, calling the system “self-regulating”. But Masiyiwa says that offering people the ability to save is even more important than credit. “We’re trying to build up a savings culture where people are encouraged to save, even if they only have a dollar – for children’s school fees, for transport, for the doctor. A savings and credit infrastructure builds resilience.” In his speech to microfinance experts at the symposium in Turin, Masiyiwa recounted a story about the judge in Zimbabwe who granted Econet Wireless’s licence in 1998, saying that 70% of people in the country had never heard a telephone ring. “Today, 75% of people [in Zimbabwe] have a cell phone,” he said “And I want 75% of the people in Africa to have a bank account … on a mobile phone.” And Masiyiwa has even found a solution to the energy problem that could prevent him from realising his dream. “We have developed solar charging stations where people can go into a kiosk and plug in their phone for free. Because our money is not made from someone charging the phone. It’s made from someone using the phone.” By way of lessons learnt, Masiyiwa says that in order to reach the unbanked, financial institutions – and telecommunications companies – must design services that are practical, simple and affordable. “I’ve got a customer who has a dollar in his pocket and has got to decide to have some lunch, call his cousin or go to the doctor. We have to develop services with sensitivity to the fact that in Africa our customers don’t have the same disposable income as in New Zealand, for example.” But the billionaire businessman cautions that it’s a mistake assume the poorest behave differently to other customers. “Their behaviour and aspirations are no different from those who have higher incomes,” he says. “They want to use Facebook. They want to use WhatsApp. We have to find ways for them to access those things with their very low income.” *Source Guardian]]>