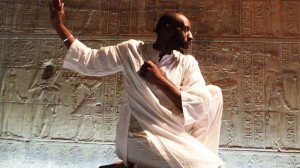 “YOGA existed in Africa in Ancient times”, says Pablo M Imani[/caption] Yoga postures can be seen on walls in Egypt, dating back 10,000 years. “YOGA existed in Africa in Ancient times”, says Pablo M Imani. Donned in black and lithe of frame, he exudes an aura of calmness. Born in England of mixed Jamaican-Tuareg ancestry –  for as long as he can remember he has always stretched like a cat. That explains his supple gait. Seeing my disbelief that yoga has ancient ties with Africa – for yoga has always been associated with Indian mystics 5,000 years ago – he explains, “yoga started in ancient Egypt with the Egyptian civilisation more than 10,000 years ago.” In my mind’s eye, I try to imagine the pharaohs and the beautiful Nefertiti saluting the sun – a popular yoga pose. Pablo continues. “Ancient Egypt stretched along the Nile valley down to Uganda, including present day Sudan, Somalia and Ethiopia.  Trade existed between the ancient Egyptians and Indians. Ethiopia was known as Kush and India as “IndusKush”. According to the Egyptian scriptures, Osiris, the Egyptian god of the underworld and revered as the king of the living, went to India because it was a colony of Kush. Ethiopia and Osiris came from Ethiopia. You have to remember that Egypt and Ethiopia were one.” According to these scriptures therefore, Osiris took yoga to India. Although Pablo also explains that “research shows ancient scriptures on African yoga like The Ebers Papyrus, an Egyptian medical papyrus of herbal knowledge dating 1550 BC.” I ask him about the Afrikan with a k. 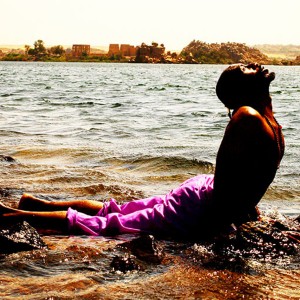 “All Afrikan languages use K. C is not in many of the current African languages. The Greeks and the English brought the C. Pablo chanced upon yoga when his brother’s girlfriend told him about it. “I was searching for myself. I didn’t feel found,” he tells of his earlier days. “Yoga back then was not cool especially for a black man from the streets, hanging around with street gangs who carried guns, got into fights and crime. In his search for himself, Pablo first went into Sufism and became initiated in 1994. “I started drinking herbal tea, wore flowing white gowns and took to chanting.” Sufism is the spiritual side of Islam, which Pablo says is a remnant of Ancient Egyptian culture with its focus on the divine through chanting, meditation and devotion to heal the heart, becoming one with the All. Next, he went into “Kheri Heb”, the Egyptian priesthood who practice an ancient form of yoga known as Smai Tawi. “The practitioners of this system re-enact the movement of gods and goddesses through focused breath or Smai Tawi. Smai is the science of breath or the union with breath. Tawi is the union of the two lands, which is the Upper and the Lower Egypt. In other words, it is the union of the physical and the spiritual. “These people understood the concept of ‘heaven on earth’. There is an Egyptian proverb which goes ‘As above, so below as below so above. As within, so without.’ According to Pablo, yoga went out of Africa to India and now it is time for the re-emergence of Afrikan yoga. I have a session with Pablo – a beginner’s class in Afrikan Yoga and it’s fun, easy and refreshing. 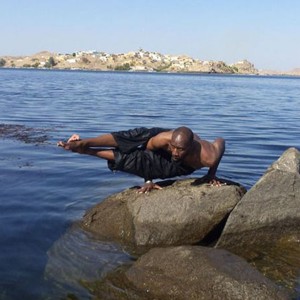 “The movements in Afrikan yoga are fluent combining the use of breath, imagination, rhythm and concentration. They relate to the elements earth, water, air and fire. “There are similarities of postures such as the plough, the wheel and others which in the Afrikan system have different names but you see these postures on the temple walls in Egypt that date back 10,000 years or more”, Pablo continues. “I branded Afrikan Yoga, because in the past Africans have created many things which many people all over the world have benefited from, but the Africans have not been credited,” he says. *Source M & G .Pablo Imani teaches at the Ugandan Buddhist Temple, Acacia Yoga Centre and In Movement Art for Social Change in Uganda. He runs Afrikan yoga retreats in Uganda and other parts of the world including Egypt and Jamaica and teacher training programmes in Afrikan Yoga.]]>