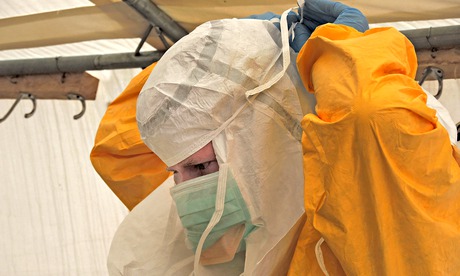 Dr Gabriel Fitzpatrick prepares for work with Ebola patients in Kailahun, in eastern Sierra Leone Photograph: MSF[/caption] The international community has made “almost zero” response to theEbola outbreak in west Africa, with western leaders more interested in protecting their own countries than helping contain the crisis that has now claimed more than 1,200 lives, a senior international aid worker said on Tuesday. Brice de la Vigne, the operations director of Médecins Sans Frontières (MSF), said politicians in industrialised countries urgently needed to take action, or risk the outbreak spreading much further. “Globally, the response of the international community is almost zero,” he told the Guardian. “Leaders in the west are talking about their own safety and doing things like closing airlines – and not helping anyone else.” His comments came as the World Health Organisation announced that the death toll in the world’s worst Ebola outbreak has now exceeded 1,200. The haemorrhagic disease, which kills up to 90% of those infected, is ravaging Liberia, Sierra Leone and Guinea, and also has a toehold in Nigeria, Africa’s biggest economy. De la Vigne, who has just returned from a tour of Guinea, Sierra Leone and Liberia, said the scale of the outbreak was comparable to a catastrophe such as the 2010 Haitian earthquake, which killed 300,000 people. “The solution is not that complicated but we need to have political will to do so. Time is running against us. But you need very senior people with high profiles, the kind of people who can co-ordinate a response to a million people affected by an earthquake,” he said. His words were echoed by Dr Gabriel Fitzpatrick, who is working at theMSF field hospital in Kailahun, the epicentre of the crisis in Sierra Leone. “If this Ebola outbreak happened in a western community, in London, you’d get a few cases and that would be it,” he said. “The main objective here is not to dramatically increase the person’s chance of survival, it’s to contain the spread” At least 810 cases of Ebola have been reported in Sierra Leone, and 348 people have died from the virus in the country, according to World Health Organisation figures. Since June Fitzpatrick has been working in the MSF field hospital, processing patients through three stages with a “suspect tent”, a “probably tent” and a “confirmed tent”. Once in the final tent, their chances of coming out alive are slim. He described one family of nine wiped out after a grandmother contracted the disease on August 4. Death is swift – usually within four or five days. Fear, rumours and conspiracy theories have conspired with poverty and high illiteracy to allow the disease to flourish in two countries whose infrastructure is already weak. “Both Sierra Leone and Liberia were at war 10 years ago and all the infrastructure was destroyed. It’s the worst place on earth to have these epidemics,” De la Vigne said. Sierra Leone and Liberia have already declared a state of emergency, but health provision is reaching breaking point. Sinead Walsh, who is working on the Sierra Leonean presidential Ebola task force, said the crisis was already causing deeper problems. She said more than 1 million people are in quarantine in Kailahun and neighbouring Kenema alone, businesses are closing, farmers are unable to trade and fears are rising about food shortages. The disease is having a knock-on effect, with sick people afraid to go to hospital for fear of catching Ebola. Health workers fear deaths from malaria and in childbirth could now also escalate. “We are gone beyond the stage of a health crisis. This is a humanitarian emergency now.” said Walsh, Ireland’s ambassador to the country and head of Irish Aid in Freetown. “We need to start working on the secondary crisis.” Fitzpatrick said the priority was to contain the disease, using local volunteers to find suspected cases and bring patients to hospitals where they can be isolated: “The second thing is to trace those who we know have been in contact and keep them under observation. We are not doing any contact tracing at the moment,” he said. “It’s not rocket science to do on a large scale across west Africa. But it needs an organisational structure and good leadership.” David Heymann, professor of infections disease epidemiology at the London school of hygiene and tropical medicine, who headed the global response to SARS while working for WHO said that oubtreak took three months to contain. He also said containing ebola was “not rocket science” identifying “contact tracing” and public communications as the key factors. One of the differences with SARS is the outbreak happened in industrialised countries where systems for “infection control” were in place, he said. *Source theguardian]]>