The government is taking proper institutional and structural measures to ensure natural gas makes meaningful contribution and steers the country to socio-economic prosperity. 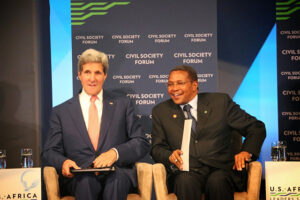 The thrust is to make sure the gas discoveries in Tanzania become a catalyst for growth and not a resource curse as it has happened in other countries in Africa and elsewhere in the world. “We want gas to complement other sectors and not compete and replace them… we want it to boost our economy and not burst it,” said President Jakaya Kikwete during a luncheon held at the Centre for Global Development (CGD) on Monday afternoon. The president who was speaking on the “Future of Tanzania following the discoveries of gas”, told the gathering, which was mainly comprised of the centre’s staff, that the country was set for the beginning of a new era in addition to working around the clock to tap the envisaged benefits. He, however, said for the institutions and policies to work, the conduct of the leadership of the day in making the right decisions at the right time was necessary. “I am committed to do my part to set institutions and regulations right before I vacate office next year. I want to be the last president of this country to manage poverty… I managed poverty but I want my successors to manage prosperity,” said the president. He maintained that the natural gas provided for that and that his preoccupation between now and the end of his term in office were to align the country in a direction for taking off. The good news, he said, was that Tanzania was a democratic state with high public scrutiny and involvement in natural resources monitoring.

According to the president, Tanzania was lucky as the discoveries came at the right time — when the country had launched the 15-year development plan. “Tanzania expects to receive the first revenue from gas around the year 2020, the time when the country would be implementing the last 5 year development plan that ends in 2025.” “That means the discovery of gas will not impact on the implementation of the development plans. This gives us an opportunity to put in place the right institutional, legal and policy environment before revenue from gas starts to flow in,” he said. All in all, he said, the government had made it clear through the national gas policy that the resources found in Tanzania belonged to the people of Tanzania and it must be managed in a way that the benefits would be shared by the entire society. Meanwhile, the president has invited American investors to come and invest in Tanzania and enjoy the most conducive environment of doing business. Speaking during a breakfast talk at the Corporate Council on Africa, Mr Kikwete mentioned a number of attributes that made Tanzania an investment destination of choice. These, he pointed out, included strong economic performance and macro-economic performance, peace and stability — and friendly business environment. *in2eastafrica]]>