Now, he is back in Kenya trying to trace his family. Ger shot a documentary with filmmaker Wanuri Kahiu titled GER: To Be Separate. 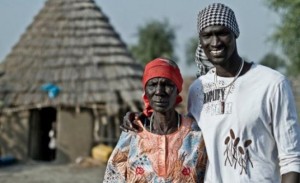 Former Sudanese child soldier now famed actor and model Ger Duany is in Kenya searching for his family after the 1980′s civil war that rocked the country. Duany who just visited Kakuma Refugee with UNHCR Kenya is looking to reunite with his long lost family. At 14 Ger fled to Ethiopia where he eventually got asylum in the United States where he developed a love for basketball. It led to a college scholarship, but during an off year caused by injury, Ger ended up getting cast by chance in film which spiralled later into a successful modelling career. Now, he is back in Kenya trying to trace his family. Ger shot a documentary with filmmaker Wanuri Kahiu titled GER: To Be Separate. Speaking to Vice.com, Ger said, “My director Wanuri Kahui and I went to Sudan in 2010, where we searched for my mom and other relatives. I had been gone for so long and most of my family and relatives thought I perished along the way. “I was desperately searching for my mother; we were separated for 18 years. We could see the struggle had taken a physical and emotional toll on the Southern Sudanese. Wanuri insisted that she would capture it: “Don’t think about the money, just go find your family and I’ll follow you.” Then, I knew that I had a friend.” Ger’s latest project is a hollywood film that stars Reese Whiterspoon and rapper Emmanuel Jal dubbed A Good Lie. “The film is inspired by the true story of the Lost Boys. It’s a collection of all our stories put into one narrative by a wonderful writer, Margerate Nagle. If I ever wrote a book, it would complement a movie like The Good Lie because it’s like reliving my past time of trauma in a therapeutic, creative release. I had to dig deep in me and get that story out. Everyone says they have a movie in them, and I think this was my movie. I think this movie is good for my country, not just good for my personal career. We need a platform like this so that our stories can be seen and felt,” Ge said in an Interview with Vice.com. Source: allAfrica.com]]>