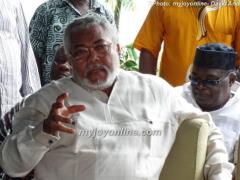 Former Ghanaian President Jerry Rawlings[/caption] Former president Jerry John Rawlings has revealed that Grammy award winning musician, Stevie Wonder, who is visually impaired has successfully flown a plane. According to President Rawlings, who is also reputed for his prowess in flying military jets, he handed over the controls of the plane to Stevie Wonder, who was then on a trip to Ghana, and Wonder miraculously flew the plan and landed safely. The former president made the interesting revelation when his family donated some items to boxers Bukom Banku and Ayittey Powers at his Ridge residence Thursday. He narrated that, “Sometimes I would fly with people in the right seat, I would take off and I would give the controls to them and say ‘you fly’. I do that with a lot of people and they have difficulties flying straight and level through the air etc but on this day, when I took from the Akosombo bush, I handed over to him this blind man, who couldn’t see, flew that aircraft so well.” “All I was doing was to tell him to turn right a bit, [turn] left,” and whenever he turns, he did something else which could only be done by people who knew how to fly. He said he accused Wonder of knowing how to fly but Stevie Wonder said he has never flown a plane before, Rawlings added. The former president, who was a Flight Lieutenant, revealed that, when they were coming back to Accra, he “guided this guy [Stevie Wonder] all the way till we landed, I didn’t touch the controls not once and…we did a beautiful landing and I was just on the power.” “People on board the plane were clapping [and] it was a small 13-seater. I think my wife was on board then. There was a French television crew on board, they filmed it. Not too long afterwards they were seeking permission to show it,” which he said Stevie Wonder did not agree. According to Rawlings, the musician did not allow it because “he had landed that thing unaided so successfully, he thought people won’t believe it and they probably won’t believe that he’s truly blind.” The ‘Signed, Sealed, Delivered’ hit singer has talked about the incident in his memoir and people still don’t believe it, Rawlings noted. Known in real life as Stevland Hardaway Morris, Stevie Wonder was born May 13, 1950 and has been blind since birth. He has recorded more than thirty U.S. top ten hits and received twenty-two Grammy Awards, the most ever awarded to a male solo artist, and has sold over 100 million albums and singles. The former president explained that Stevie Wonder was able to land the plane successfully because he is blind. “When you can see and you are coming to land, the approaching runway has a way of intimidating you. You think you are going to crash into it so before you even reach low enough you are pulling back, you are afraid you are going to crash into the group. We all do it as leaners till we overcome that thing,” he observed. “Because this man could not see, he did not have that fear. He was not intimidated by an approaching run way,” Rawlings added. The former president also disclosed that he thought his daughter Zanetor to fly at age 13 and she even flew a plane by herself. *Source modernghana]]>