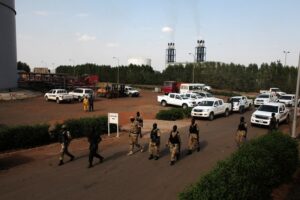 The richest oil fields in South Sudan’s Unity and Upper Nile states remain mired in conflict. Shown, soldiers walk past the Paloch oil-field facility in Upper Nile State in March. Reuters[/caption] Seeking to keep their cash-strapped government afloat, South Sudan officials huddled in June in Juba with Chinese, Malaysian and Indian oil executives to propose an emergency loan of $200 million, according to participants in the meeting. As they made the appeal, officials shared some other unwelcome news: South Sudan couldn’t pay back the $1.6 billion it had already borrowed from these companies. “We can’t afford to service our debts at the moment,” Finance Minister Aggrey Tisa Sabuni said to the group, according to a South Sudanese official who attended the meeting. “Unfortunately this is a situation we cannot get out easily without more advance payments.” As government officials made presentations, executives exchanged handwritten notes. Over the past three years, China’s National Petroleum Corp. Malaysia’s Petronas, and ONGC Videsh Ltd. of India had extended advance payments on a percentage they would give the government for every barrel of crude exported from South Sudan. But exports had slowed amid armed conflict. The executives said they no longer wanted to offer hundreds of millions of dollars in advances with dim prospects of returns. South Sudanese stormed out of the meeting, according to a person with direct knowledge of the matter. “We have expressed our concerns about further payments,” said Rajendra Nigam, the country manager for ONGC Videsh, the overseas investment arm of Oil & Natural Gas Corp. 500312.BY -1.46% , who attended the meeting. “We still can’t do any meaningful operations.” CNPC and Petronas declined to comment. When South Sudan broke away from Sudan in 2011, after a two-decade civil war, its new leaders tied the nation’s fortunes to peace and a steady flow of crude exports. The country hasn’t had much of either, straining ties between the government and the foreign oil companies who have propped up the world’s youngest nation. Following South Sudan’s independence, Asian companies that had concessions with rival Sudan negotiated fresh deals with the new government in Juba. Western companies such as France’s Total SA and Exxon Mobil Corp.XOM +1.50% returned to claim dormant concessions. Three years down the road, oil output is sputtering—160,000 barrels-a-day from 350,000 barrels-a-day at the time of independence in 2011. The big reasons why: The richest oil fields in South Sudan’s Unity and Upper Nile states remain mired in conflict. And because of the insecurity —caused by armed cattle rustlers and militias allegedly backed by Sudan—there has been little headway in exploring another high-potential oil block in Jonglei state. In 2012, Sudan closed its pipeline for 15 months while the two countries negotiated transit fees. After that spat was resolved, an internal power struggle in South Sudan erupted, pitting President Salva Kiir against his former vice president Riek Machar. More than 10,000 people have been killed in the conflict, while nearly 1.5 million remain displaced, according to aid agencies. Deprived of oil revenue, which accounts for 95% of the government’s total, South Sudan has struggled to remain solvent. In recent weeks, hundreds of troops have deserted the frontlines, according to the United Nations and other humanitarian officials, after not being paid. The government has also frozen travel allowances and overtime payment of civil servants, crippling government-run hospitals and schools. Meanwhile, the U.S. has warned citizens against traveling to the country amid fears of possible mutiny among the remaining soldiers loyal to President Kiir. “We are having challenges raising money to pay some soldiers because we are not producing enough oil,” said Ateny Wek Ateny, the spokesman for the presidency. Trouble is, Juba doesn’t just owe its own troops money. South Sudan is also paying the bills of more than 3,000 Ugandan troops, who are helping to put down the rebellion. Yet the constant appeals to oil executives for cash—June’s request was the fourth since last year—has meant that foreign oil companies so far have extended a total of $1.6 billion to South Sudan’s government. South Sudan’s government hasn’t yet approached Western oil companies Total and Exxon for money because they aren’t yet operating oil fields for which they have exploration licenses, government officials say. Asian companies were much quicker to go into South Sudan, and the first to experience the extreme turbulence of operating in the new nation. In the most recent fighting, CNPC and Petronas evacuated staff from oil fields after rebels attacked the oil hubs of Bentiu in Unity State and Malakal in Upper Nile state. The two towns have since changed hands several times, between rebel fighters and government troops. Both companies now maintain a skeletal staff operating their oil fields. Meanwhile, ONGC Videsh has invested $1.5 billion in assets located in both Sudan and South Sudan, trying to ensure steady production. But shortly after the outbreak of violence in December, the company closed its operations in Unity state. That didn’t stop the government from asking the company for more money—an appeal that bewildered even South Sudanese oil executives. “From a business point of view,” noted a top executive for South Sudan’s state oil company, who declined to be named, “it does not make much sense to ask companies to extend more money when operations remain at a standstill.” *Source WSJ ]]>