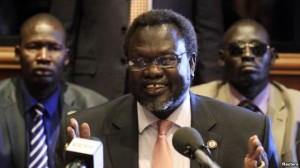 South Sudan rebel leader Riek Machar addresses news conference in Addis Ababa, Ethiopia, May 12, 2014.[/caption] South Sudan former vice president Riek Machar has rejected President Salva Kiir’s proposal to name him as second vice president in a transitional unity government before next year’s vote as part of a negotiating deal to end the country’s seven month conflict. In an interview with VOA, Machar who heads the rebellion against the government in Juba says his representatives at the talks want direct face-to-face peace talks with officials of the government at the negotiations in neighboring Ethiopia to resolve the conflict. He says the involvement of other parties in the negotiations has often hampered efforts to reach an agreement to end the conflict. “I believe that direct talks between us and the government will yield quicker results and will ensure the peace agreement arrives faster than having others on the roundtable,” said Machar. “ He blames mediators from the Intergovernmental Authority on Development (IGAD) after the talks failed to meet the August 10 deadline.  IGAD extended peace negotiations to August 28, after the two parties failed to meet the deadline to conclude a peace agreement. Machar said IGAD is to blame for failure to meet the deadline. “Personally, I blame the mediators because at times they would suspend the peace talks without a good reason, particularly, when the chief mediator went to New York, we could have continued the peace talks,” said Machar.  “We were saying, we want to have direct talks, but now the mediators are insisting that there would be round table talks with five others; the civil society organizations … and former detainees with the two parties.” Machar says as a demonstration of his commitment to the negotiations he has remained in Addis Ababa to help expedite the peace talks. But the South Sudan government has repeatedly accused the rebels of undermining the recent agreement signed between President Kiir and Machar that called for the cessation of hostilities.  The government says rebels allied to the former vice president attacked civilians as well as positions of the national army in parts of the country, which the administration says contravened the agreement. Machar dismissed the allegation as false.  He says the presence of Uganda troops is a violation of the agreement signed between the two parties. “The cessation of hostilities stipulates the Ugandan forces must withdraw and they should have withdrawn last January, [but] up to now they are in South Sudan,” he said. “If you make a map, of when the cessation of hostilities was signed since January 23, and you map out the locations of the government at the time and you compare with the locations they are in today, it will show you that they are the ones advancing and they are the ones violating the cessation of hostilities,” said Machar. He says his group wants the root causes of the conflict to be resolved, calling for reforms in the country’s army, judiciary, and civil and public services. Machar denied reports rebels loyal to him have been re-arming for another round of intensified combat with South Sudan’s national army. “Where do I get money to buy arms?  It is the government that is buying arms from China.  It is Juba that is buying arms using our oil, while our people are suffering.  When there is looming humanitarian disaster, famine is coming, and Juba is buying arms at the value of $ 1.7 billion when the need for averting the humanitarian disaster is $700 million,” he said. *Source VOA]]>