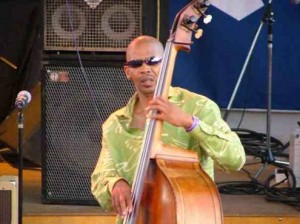 Down to earth, unassuming and humble; Jazz Bass Guitarist, Mlungisi Gegana is launching his 2nd album on the 22 August at Winnie’s Soul & Jazz Restaurant in Sandton, Johannesburg.   After travelling around the country to find his musical home, the man with over decades of experience in the art of the bass guitar has settled in Johannesburg and he released a long awaited Jazz fusion album aptly titled; ‘I am who I am’ (2014 – Independent). His last solo release was ‘One Step Forward’ (2004 – Gallo), a decade ago. https://www.youtube.com/watch?v=opXHCtZMsUk   Hailing from the Eastern Cape, Mlungisi is a brilliant self-taught Bass Guitarist whose musical career saw him grow from pop music (with The Black Slaves), occasional club appearances (notably Kippie’s Jazz Club in Newtown) to a leading South African Jazz name with respect from his peers (Godfrey Mgcina, Vusi Khumalo and Louis Mhlanga to name a few) and a home with a prominent booking agency; BakTu Musik.   Credited as an exciting songwriter as well, Mlungisi Gegana wrote all the songs on his debut album (as well as the second album), arranged and produced them too! He draws inspiration from Traditional and Mainstream Jazz fusion resulting in a style recognized as hard to classify but a pleasure to enjoy.   “I pick up the bass (guitar) and start playing around with notes. If I hear something I like, ke, I find it just naturally develops into a song..” says Mlungisi Gegana.   In live performances, he is accompanied by good musicians including: Lifa Arosi  – Piano, Siphelelo Mazibuko  – Drums, Ayo Solanke  – Tenor and Soprano Saxophone Sibusiso Mkhize – Trumpet and Flugal Horn.   Mlungisi Gegana has just released his follow up album titled ‘I am who I am’.  ]]>