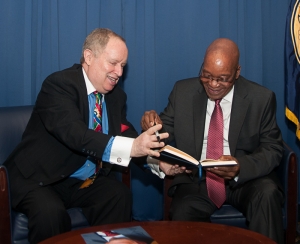 National Press Club President Myron Belkind hands a pen to South African President Jacob Zuma as Zuma prepares to sign the speaker’s guest book.
Photo/Image: Al Teich[/caption] President Jacob Zuma of South Africa enumerated the progress achieved by his country in the last 20 years, telling a packed National Press Club Luncheon, Aug. 4 that South Africa has “a really good story to tell” about its democratic rule, while also acknowledging “the really hard road ahead.” Zuma, who is serving a second term after winning a re-election in 2014, said his administration was happy there were “about 600 U.S. companies investing in South Africa,” a development which he saw as a vote of confidence for the viability of the country as an investment destination. “We look forward to the further expansion of trade and other investment opportunities with the U.S. and other key markets,” he said. He said South Africa would not achieve this success alone, but as part of a “broader African success story,” as the country works with other African nations for economic integration, promotion of industrialization, power generation and to boost regional trade. Challenges remain in the areas of peace, security and poverty in some areas of Africa, while the preferred solution would be an “African-led” one to tackle African problems, Zuma said. He also said that the African continent would have to work in partnership with “the world” to successfully deal with the problems. While fielding questions from the audience on a wide range of issues, Zuma was asked if President Barack Obama could have done more for the African continent due to his African lineage. He said Obama was always aware of this fact, which may have made him “tread very carefully,” when dealing with Africa. “I believe he could have done more, but I think he was always aware of this fact and therefore he has navigated that situation very well,” said Zuma. In response to a question about the risk faced by South Africa from Ebola, he said the country was at no risk, so far, and was working together with health institutions all over the continent to address the problem.   http://www.youtube.com/watch?v=aUo2QPuzP9w#t=452 Zuma said South Africa was working with other African countries to find a lasting solution to religious extremism, and that countries in the African Union had discussed this problem, resolving to have a “quick reaction force” to deal with such issues, in many of the areas where they emerge. “We believe that if it is allowed to be rooted in certain areas, it will certainly spread to other areas, so we are coming together to ensure that it is stopped,” he said. While answering a question from the audience asking if he agreed with the call by his party to expel the Israeli ambassador from South Africa, due to the conflict in the Middle East, he said “people were worried about what was happening,” and the problem was complex, but South Africa had “experience” which they could offer the two sides. This was in reference to what he called “institutionalized racism in South Africa,” which he said the country had managed to overcome, calling on both sides in the Middle East to sit and talk, rather than resorting to a military option. Zuma led a South African Delegation to Washington to attend a U.S.-Africa summit, initiated by Obama. *Source NPC]]>