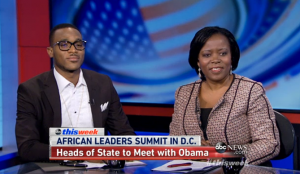 Nigerian recording artist D’Banj and Dr. Sipho Moyo, Africa Executive Director for the ONE Campaign, discuss the upcoming U.S.-Africa Leaders Summit. Clip and image courtesy of ABC This Week[/caption] On the eve of the historic Africa Leaders Summit in Washington, DC, ONE is getting noticed for our successful Do Agric campaign in Africa. ONE’s Africa Executive Director Dr. Sipho Moyo and Nigerian music sensation D’Banj appeared on ABC This Week with George Stephanopoulos to discuss the campaign and what they see coming up for this week’s summit. D’Banj discussed the Do Agric campaign’s 2 million petition signers who are calling out to African leaders for more investments in agriculture to fight poverty and create jobs. Dr. Moyo said our campaign struck a chord because African citizens petitioned their own leaders with their concerns over agriculture and are pushing for these leaders to keep their commitments to investments. D’Banj said the African Leaders Summit’s theme of “investing the next generation in Africa” will be important this week for leaders to help expose “the wealth in Africa.” Moyo hoped conversations between President Obama and African leaders focus on agriculture and energy as ways to unlock Africa’s economic potential. Watch the entire clip of “ONE Campaign Tackles African Poverty” from ABC’s This Week:]]>