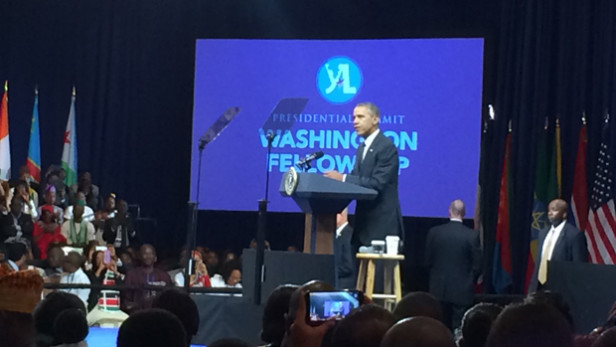 President Barack Obama delivers remarks at the U.S.-Africa Business Forum during the U.S. Africa Leaders Summit in Washington, D.C., Aug. 5, 2014. (Official White House Photo by Lawrence Jackson)[/caption] Taking the stage ongoing USA-Africa Leaders’ Summit, President Obama has reassured Africans that the US will be a good and equal partner committed to the long haul in Africa’s success. Addressing a full house which included about fifty African Leaders at the U.S.-Africa Business Forum in Washington, D.C, President Obama said there was partisan consensus in Washington that a secure, prosperous and self-reliant Africa was a national security interest for the USA.In the midst of the challenges the continent is still grappling with, the new Africa emerging cannot be ignored, and the Summit was a reflection of the perspective that has guided his view of Africa, Obama said. “We all know what makes Africa such an extraordinary opportunity.  Some of the fastest-growing economies in the world.  A growing middle class.  Expanding sectors like manufacturing and retail.  One of the fastest-growing telecommunications markets in the world.  More governments are reforming, attracting a record level of foreign investment.  It is the youngest and fastest-growing continent, with young people that are full of dreams and ambition,” the US President said. The sentiment from his trips and interactions with young Africans has been for equal trading partners, trade, and development and not necessarily aid and the US is determined to partner Africa towards its success said Obama .The US wants to be a good and equal partner for the long term President Obama said . “We don’t look to Africa simply for its natural resources; we recognize Africa for its greatest resource, which is its people and its talents and their potential.  We don’t simply want to extract minerals from the ground for our growth; we want to build genuine partnerships that create jobs and opportunity for all our peoples and that unleash the next era of African growth,” he said in strengthening the US case for partnership. Obama indicated that his Administration has increased investments in Africa and more trade missions resulting in the growth to record levels for American exports to Africa which support jobs in Africa , and the US which has gained a quarter of a million good paying jobs .   https://www.youtube.com/watch?v=xGbYc-sizsg For all the progress, US trade with Africa is just a quarter of its trade with Brazil and of all goods that America exports, only one percent goes to Sub Saharan Africa Obama said while expressing the desire for Africans to buy more American products ,and Americans to buy more African goods. It is time for America to up its game Obama said as he announced some of the prominent business deals accruing from the Summit. “Blackstone will invest in African energy projects.  Coca-Cola will partner with Africa to bring clean water to its communities.  GE will help build African infrastructure.  Marriott will build more hotels.  All told, American companies — many with our trade assistance — are announcing new deals in clean energy, aviation, banking, and construction worth more than $14 billion, spurring development across Africa and selling more goods stamped with that proud label, “Made in America,” he announced. To keep up the momentum President Obama announced additional steps like working to renew and enhance the African Growth and Opportunity Act, and $7 billion in new financing to promote American exports to Africa as part of the “Doing Business in Africa” campaign. The new measures also include partnership with Africa to build the infrastructure that economies need to flourish, doing more to help Africans trade with each other, and empowering the next generation of African entrepreneurs and business leaders. https://www.youtube.com/watch?v=DDuQsjGMK1g “The United States is making a major and long-term investment in Africa’s progress.  And taken together, the new commitments I’ve described today — across our government and by our many partners — total some $33 billion.  And that will support development across Africa and jobs here in the United States,” Obama declared. While investment was important, the key to unlocking the next era of African growth will be in Africa Obama said in highlighting issues that have featured on the Summits agenda like Agriculture, Capital, health infrastructure, good governance, and rule of law. President Obama’s remarks ended with a question and answer session with Takunda Chingonzo a 21 year old Zimbabwean entrepreneur working in   wireless technology space.Chingonzo is a 2014 Mandela Washington Fellow