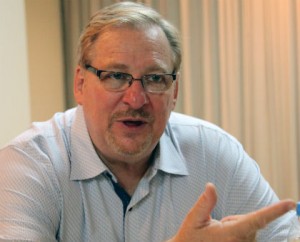 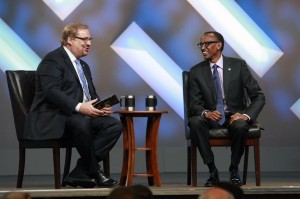 President of Rwanda, His Excellency Paul Kagame,(R) joined Pastor Rick Warren Saturday evening for Kwibuka 20, a special service at Saddleback Church to honor the victims of the Rwandan genocide 20 years later and celebrate the partnership and efforts of The PEACE Plan in Rwanda over the past 10 years, April 26, 2014.[/caption] The Genocide was evil. Anyone who doesn’t believe in evil should look at the Genocide against the Tutsi. The worst part of this genocide was not only the atrocities committed but also when the world chose to watch and do nothing. When the world turned its back on Rwanda and let evil prevail, that was a dark moment. Do you think there are lessons that nations in conflict like Central Africa Republic can draw from Rwanda?  Whenever there is a conflict, over ideas, the right place to begin is by finding avenues that will bring you together to do a common thing together. We can disagree about religion, politics, but it is always good to do things together that will bring you together. With that, the two parties in disagreement get to learn about the other and try to see things from the other people’s point of view. The key is getting people to get together, they will understand where the others are coming from and the reasons for their view point. Regarding your involvement in Rwanda, how much influence do you have on policies and development matters?  I have no influence on Rwandan policies or politics. I am not a policy-maker; I am a pastor. When I deal with government leaders, I never talk to them about politics. I only talk to them about their personal needs, how to handle stress as a leader, how to handle family, how are they dealing with management of their time. I have no roles in advising or influencing in areas of policies. I have friends in government and business, it is like three legs of a stool; for a society to be stable, it requires a public sector, private sector and a faith sector. There has to be government, businesses and churches.  None can do what the others do. What areas would you advise investors to consider when putting their money in Rwanda?  There are numerous sectors that are profitable to invest in. if I had a choice out of many, I would probably put money in transport and logistics. Rwanda is in the middle of several countries and is landlocked, so currently there are developments to open it up through air, rail and roads, soon it will become a hub for all the countries around it as they do business. Often times Rwanda receives the flacks from various international bodies and individuals, what do you make of such critics?  The criticisms against Rwanda are coming from four sources. They are all biased sources. The first group of critics is the genocidaires who are still alive, the Interahawe. They are in various places around the world and will do anything they can to depose the government. It is expected that they will criticise and speak ill of the country. The second group is of certain countries like France that supported and protected the wrong group during the Genocide. They allowed the genocidaires to escape through and into DR Congo. There was a break down in relations with France as Rwanda chose a path of its own that some people in France were not very happy with and hence the criticism. The third group is the United Nations; they have blood on their hands, they did nothing when they could have stopped the Genocide. The UN has a guilty consciensce. There is conflict on why is the nation least dependent on the United Nations is among the most successful. So their reports may be biased. The last group is people who served in this government in the past and got caught in corruption and other vices. They were friends of Rwanda, but when they lost their jobs, they became bitter and go around writing articles full of criticisms. All these four groups are biased and are in no position to provide balanced opinion about the country. *Source newtimes]]>