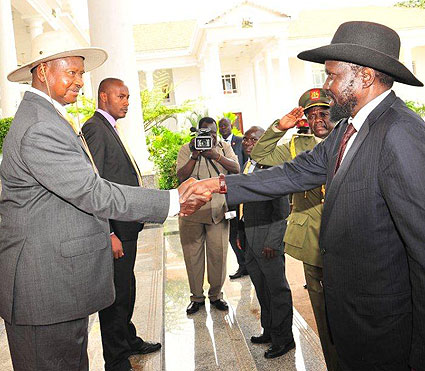 The two leaders discussed bilateral issues between their two countries including the conflicts in South Sudan where an estimated 10,000 South Sudanese have been killed and more than one million displaced since violence broke out in the country eight months ago. The United Nations Security Council (UNSC) warned in a presidential statement earlier this month that it is prepared, in consultation with IGAD and the African Union (AU) to impose targeted sanctions “against those who take action that undermines the peace, stability, and security of South Sudan, including those who prevent the implementation of these agreements” President Kiir who was accompanied by Minister of Presidency Mr.Awan Guol, Minister for Transport, Roadand Bridges, Mr.Koong Donhier and Government officials from South Sudan was received on arrival at Entebbe International Airport by State Minister for Foreign Affairs Mr. Okello Oryem and Head of the Public Service Mr. John Mitala. Others at the airport to receive him included Commander Air Force Maj. Gen. Sam Turyegenda, Inspector General of Police Gen. Kale Kayihura, Commissioner General of Prisons Dr. Johnson Byaibashaijja and South Sudan Deputy to Ambassador to Uganda Ms. Sarah Victor. *Source The New Vision/in2eastafrica]]>