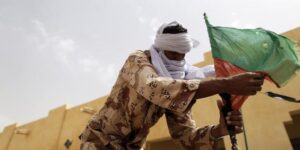 Dozens of children have been recruited to fight by both pro-government militias and armed opposition groups in Mali.
© AFP/Getty Images[/caption] Children accused of being members of armed groups in the conflict in Mali are languishing in adult jails while human rights abuses continue, said Amnesty International in a short briefing published today. Mali: All parties to the conflict must put an end to ongoing human rights violations presents the findings of a research mission to assess the human rights situation in the country. “Children have suffered throughout this conflict. A number of them as young as 16 have been recruited as child soldiers and those accused of being members of armed groups are being detained alongside adults without access to family or legal counsel,” said Gaetan Mootoo, Amnesty International’s West Africa researcher. The briefing highlights new cases of children arrested and accused of being members of armed groups and of the illegal possession of firearms and ammunition between mid-2013 and 2014. They are currently being held in detention alongside adults, in breach of Mali’s international human rights obligations as well as the memorandum of understanding between the Malian government and the United Nations. Since the beginning of the conflict in January 2012, dozens of children have been recruited to fight by both pro-government militias and armed opposition groups. A number of children suspected of belonging to armed groups have been arrested by the Malian authorities and are now being held in detention in both the Bamako civil prison and the Bamako gendarmerie Camp I. They receive no access to lawyers in detention or family visits, due in part to the fact that they are being detained far from home. The briefing, which brings together the findings of an Amnesty International research mission to Mali in June 2014 also uncovered evidence of deaths in custody and continuing violence perpetrated against civilians by armed groups. Amnesty International investigated the May 2014 clashes in Kidal in the north of Mali, documenting the ongoing insecurity and continued targeting of civilians by armed opposition groups. They include the Azawad National Liberation Movement (Mouvement national de libération de l’Azawad, MNLA), the High Council for the Unity of Azawad (Haut conseil pour l’unité de l’Azawad, HCUA) and the Arab Movement of the Azawad (Mouvement arabe de l’Azawad, MAA). The town has remained under the effective control of armed opposition groups since the conflict broke out. The government administration has not yet resumed and schools remain closed, while judicial bodies are not functioning. Amnesty International’s delegation confirmed from multiple sources, including several eyewitnesses, the wilful killings committed by members of armed groups at the Governor’s office in Kidal where members of armed groups entered on 17 May and deliberately killed eight civilians, including six government officials. Amnesty International is calling for prompt, thorough, impartial and effective investigations into all allegations of crimes under international law and for the suspected perpetrators to be brought to justice in fair trials. “It is time for the Malian authorities to put an end to persistent human rights violations. Armed opposition groups controlling the north of the country should immediately stop abductions and wilful killings of civilians as well as hostage taking,” said Gaetan Mootoo. “Children currently held in adult prisons must be transferred to government agencies or to organizations that will guarantee them the special protections required by international law.” *Amnesty International]]>