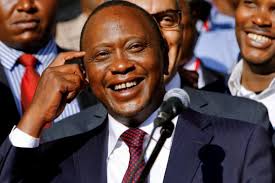 KAMPALA – Kenyan president Uhuru Kenyatta has strongly emphasized that human capital is the one-most important asset necessary for East Africa’s eventual success, saying that young people in the region need to commit themselves to work. He said this in front of a huge crowd of mainly youths at the fourth edition of Vision Group’s Pakasa Forum in Kampala. The Kenyan leader, who is the current chairman of the East African Community (EAC), delivered a keynote address before answering questions from the crowd inside the Kampala Parents School auditorium. The questions were diverse, touching on pertinent issues, including unemployment, education, economy, public service, transport, and many more. Kenyatta first met with his host, President Yoweri Museveni at State House Nakasero before making his way to the venue. The two leaders, together with their South Sudanese counterpart, Salva Kiir, held talks ahead of an upcoming meeting in the Ethiopian capital Addis Ababa, Kenyatta said. He arrived at the venue at 1.20pm local time under stifling temperatures. The venue was provided for free by its proprietor Sudhir Ruparelia, one Africa’s richest men. Speaking before a massive group at the business conference, the Kenyan president said “when we talk about the future of East Africa, we are speaking about the future of the youth”, pointing out the need to have young people trained. But to realize regional prosperity, East Africa, he said, needs to break away from the mindset of the older generations, which he said as a way to acknowledge respective cultures, in turn led to society then being divided along ethnic and tribal lines. “We need one another. We cannot in this day and age continue to talk like our grandfathers.” The son of Kenya’s founding father Jomo Kenyatta, he told his audience that the needs of a young man in Uganda are similar to those of one in Kenya or Tanzania or anywhere in East Africa. “We should look at each other as people who can work together in solidarity,” he said. Kenyatta, who traveled along with his 18-year-old son Muhoho Kenyatta, said it would be “a dream come-true for me if the dreams of our forefathers come true in the next ten years.” Looking rather relaxed in front of his new audience, the Kenyan leader made himself comfortable, making sure before taking his seat after his address, to coolly take off his dark coat when the heat inside the fully packed auditorium took its toll on him. In fact, he was apologetic for his late-coming, an apology his highly expectant audience accepted with an appreciative applaud when he explained how he had to meet his host first, before anything else. While responding to the questions, he, as if to setlle into the moment of day, once in while joked with the moderator Vision Group’s CEO Robert Kabushenga. That seemed to have worked way perfectly well for him as he spoke of how the youth can generate wealth and related opportunities by engaging in agriculture. “Look at this a source of opportunities, a source of wealth going forward,” he said. For long, unemployment among youths is one of the biggest headaches for the region’s governments, and in response to one of the questions on this issue, Kenyatta said a railway line currently being work on would create jobs and would “make business in East Africa much faster, and therefore attract the pool of investment within the region” He said persistence, patriotism and commitment “of our young men and women” is key in driving the region to prosperity. Asked what guarantees had, for example, been put in place to ensure that locals secure most of the jobs by foreign investors, the Kenyan president underlined that such measures existed — at least in his country. He said that in Kenya, East Africa’s biggest economy, the requirement is that 90% of the jobs available from foreign investment are secured by the locals. ‘Seven resources’ Also, the president said that for such investments, all materials that can be procured domestically must be supplied by local entities. “We must benefit from the local market through all the stages of development,” he said. Earlier, before the arrival of the key speaker, former Uganda National Examinations Board (UNEB) chairman Fagil Mandy tipped the youths on the benefit of skills and taking advantage of available opportunities. “Believe that opportunities are there. Use opportunities around you,” he advised. “You must accept to train yourself maximumly. Through training, each your body parts can make money for you.” The educationist provided the young men and women with what he called ‘the seven resources”, which in the form of investigation of oneself;

It is what one does with these seven resources that will determine whether one will succeed, or fail, said Mandy. ‘We need to do more’ Meanwhile, President Kenyatta, who admitted he has never been unemployed but once made a few mistakes of his own before “getting myself back on track”, told the youths to believe in themselves. “Believe in yourself, so as to change your life. Be committed to service other than be committed to money. Never feel that you are too young.” But while pointing this out, he was certain to stress that corruption has been and still is “one of our biggest issues” to tackle. “We need to do a lot more than we are doing to change the mentality of our people.” *Source    newvision]]>