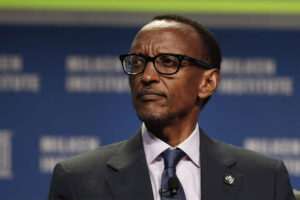 Rwanda plans to sell its second international bond of as much as $1 billion next year to fund the construction of an airport and power plants, seeking to tap burgeoning investor demand, President Paul Kagame said. The East African nation wants to build on the success of the $400 million bond issued in April 2013 that was more than eight times oversubscribed, Kagame said in an interview at the U.S.-Africa Leaders Summit in Washington yesterday. At that foreign-debt sale, the government declined investors’ suggestions to increase the size of the offer, he said. “We might go for double that or more, up to $1 billion,” Kagame said. Rwanda is one of Africa’s fastest-growing economies, averaging 7 percent over the past five years. The economy is forecast to expand 7.5 percent this year and next, according to estimates from the International Monetary Fund. Kagame, who has been in power since 2000, has implemented policies that have helped rebuild the economy after a genocide in 1994 that left at least 800,000 people dead. “People who want to see Africa develop come to Rwanda particularly because we have set up a very good environment that makes things work for us and for our partners who come invest with us,” Kagame said.

Yields on Rwanda’s Eurobond, due May 2023, have dropped 138 basis points, or about 1.4 percentage point, this year to 6.10 percent as of 2:14 p.m. in London. Falling borrowing costs have prompted African nations from Kenya to Senegal to tap global bond markets, with sub-Saharan African nations selling $6.39 billion in debt this year, compared with $9.7 billion in all of 2013, according to Standard Bank Group Ltd., the continent’s biggest lender. Rwanda’s non-concessional borrowing limit, set by the IMF, is $250 million for the 2014-15 fiscal year. The Washington-based fund previously has been accommodative in raising the ceiling when African countries are able to tap offshore markets at cheap costs, said Samir Gadio, head of Africa strategy at Standard Chartered Plc in London. “But the other consideration is that external debt sustainability should not be jeopardized,” he said in an e-mailed response to questions. “Given the size of the economy, a $1 billion Eurobond would represent around 13 percent of GDP, which is significant.”

Rwanda is “working with the IMF on some reforms and we will announce the results,” Finance Minister Claver Gatete said by phone today from Kigali, the capital. “We are allowed to borrow, but it is work in progress and we need to decide when to go back to the market and if the money is needed.” Kagame said investor appetite for Rwandan bonds was a vindication of his policies and show investors are undeterred by criticism from human-rights advocates that the government is stifling political freedoms. Groups including Human Rights Watch and Amnesty International have accused Kagame’s administration of carrying out abuses such as illegal detentions and cracking down on dissent. The government has denied the claims. “The markets are never wrong,” Kagame said. “Look at the situation in Rwanda, where we have been 20 years ago and where we are now. It’s short of miraculous. It can’t be just because we are violating human rights. It’s because actually we value and respect human rights.”

The infrastructure projects that Rwanda plans to fund include an upgrade to the country’s main international airport outside the capital, Kigali, and the construction of a 150-megawatt geothermal plant, he said. Funding is also required for a methane-fired power facilities project that involves extracting the gas from underneath Lake Kivu that will produce as much as 100 megawatts of power, he said. President Barack Obama is hosting more than 40 African heads of state for the summit this week, aiming to spur U.S. investment and trade with Africa. China’s trade with the continent exceeded $200 billion last year, more than double that of the U.S. Obama yesterday highlighted $33 billion in commitments to Africa, including $14 billion in investments from companies such as General Electric Co. (GE) “It’s a very significant step in the relationship between Africa and the U.S.,” Kagame said. “If things are done right, the relationship, the partnership between the United States and Africa, has the potential to bypass that relationship between Africa and Europe. Also the relationship between Africa and China.” *Source Bloomberg ]]>