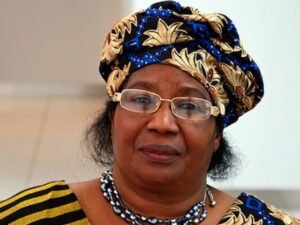 Joyce Banda[/caption] Passing through Johannesburg on her way back, she spoke to Methil Renuka, Editor of Forbes Woman Africa, about the decisions she had to take in Malawi’s much-disputed May elections, and also her intention to continue her work championing women’s rights once she returns home. Joyce Banda, Malawi’s former President, has had a busy month in the United States, taking the message of the Joyce Banda Foundation, a social initiative that she has been spearheading in Malawi for the last 16 years, to the world. She has met with several high-level dignitaries while in the US including Hillary Clinton and Archbishop Desmond Tutu. In Johannesburg on her return trip to Malawi, Banda’s schedule has been no less hectic. She has had a meeting with South Africa’s Graca Machel for a maternal and child health program, as also meetings with “interested parties and friends” who want to support her foundation and improve the services it provides to women and children. “My mission in life is to assist women and youth gain social and political empowerment through business. We need to do more. For me, empowering women and achieving gender equality is my goal, not only in Malawi but across Africa. That’s what brings me to South Africa,” says Banda, southern Africa’s first female president. Her country’s chaotic May 20 elections are still fresh on her mind. She says there was a point in the immediate aftermath of the polls when she had to take responsibility, call for a recount, and in the end, step aside for peace to prevail. “When we went into the elections, the first day, the first hour, a lot of things happened that made Malawians uncomfortable. In Blantyre, materials were not there, people started agitating and throwing stones. We knew straight away there was going to be trouble.” “The law in Malawi says, you vote in one day, but the people were voting four days later. So there were a lot of complaints and evidence things were not right. So what I did was to take responsibility and called for a recount or an audit to make sure people are comfortable. Because what brings conflict in most parts of the world after elections is when there is doubt, when there is mistrust.” Banda says she asked for legal advice and was told she could ask for a rerun. “At that point, I realised if I am calling for a rerun, it will look like I have vested interests, that maybe I want to influence that second part of the elections, so I said I was stepping aside. The next day, the electoral commission announced they wanted to confirm that indeed there had been massive rigging, and they too were endorsing a recount. In the end, the judge ruled in favour of the incumbent president.” “People have asked me, why did I concede? I felt it was important for me to allow peace to prevail. I have always said in life that Malawians come first, and this was an opportunity for me to demonstrate that. It should be in the best interest of Malawians. But Malawians should also not shed blood. There is life after statehouse and so much more I can do. I chose to concede, and I have no regrets. I respect the [newly-elected] president.” Banda also spoke about her economic track record during her short two-year presidency, when the country’s economy grew from 1.8 per cent in 2012 to 6.2 per cent in 2014. https://www.youtube.com/watch?feature=player_embedded&v=mGWZ53qo_dI#t=0     “What gives me great pride is that I left Malawi at a better place than where I found it. When I came in, the economy was on the verge of collapse. That year, growth was only 1.8 per cent. We didn’t have fuel for a day, companies were scaling down. I had to work very quickly…we devalued the kwacha, drew up an economic recovery plan.” “By the time I was leaving statehouse, the economy grew by 6 per cent. We had a harvest of 3.9 million metric tonnes. Companies were operating at 85 per cent. We now had a forex cover of three-and-a-half months [from a week]. By the time I left, we had fuel for 15 days at any given time. We had a model village in every district. We had reduced maternal deaths in two years. “The one thing I wasn’t aware of when I came into office is I wasn’t aware there was so much corruption, and that corruption affects the gains you make.” For this, Banda says she had to revamp Malawi’s financial management system, which subsequently led to 68 arrests and frozen bank accounts. “I was warned by colleagues from across the continent that it’s not easy to fight corruption…because you are fighting very powerful people who are benefitting from that kind of money, and if you are not careful, you will get smeared on, be fought through and through, dragged to the ground.” “For me, the choice was simple, is it Malawians, or is it my career?…For me, it is Malawians first, even if it means putting my political career on the line…The good news is that the current president has also decided to go ahead with the fight against corruption.” *Source cnbcafrica]]>