A father and his pilot son in a country with no history of manufacturing are making products that will stun the world.   By Kent Mensah* [caption id="attachment_11350" align="alignleft" width="300"] 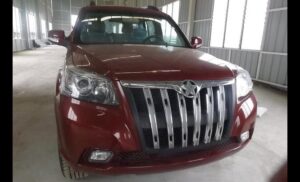 Kantanka brand of SUV that is ready for the market[/caption] Accra, Ghana – Imagine having a television set that comes on after an effortless clap or by blowing air; picture yourself in a car that is engineless and starts with a simple push of a button tucked to your dress; or a change-over-machine that speaks and tells you where exactly a fire or electrical fault is in your home. This is not fiction. It is not magic. It is not happening in Europe or Asia and not even in the United States. These products are being manufactured in the West African nation of Ghana. The brains behind this is Apostle Dr Kwadwo Safo, owner of the Kantanka Group of Companies. He is naturally gifted. A genius. An inventor and a philanthropist. He has no formal or sophisticated technical background. He imagines, dreams and creates at will. He lives in his own world. It takes about 45 minutes from Accra, the capital, to reach his “city” at Gomoa Mpota in the central region of Ghana. It is set apart from the hustle and bustle of cosmopolitan Accra. His flag – blue, red, yellow and white stars embossed on the blue hue – constantly flies at a junction on the highway you reach after going past beautiful green landscapes that lead to his location. It is a large tract of land. The buildings are huge. The ambiance is engaging. It has a natural touch and feel, complete with tortoises – the oldest is 40 years – and a porcupine, evidence of Safo’s love for nature. Engineless car A large African map showing a picture of Apostle Safo spinning a ball imprinted with pictures, a huge star beneath it and a miniature aircraft welcome visitors. It takes close to two-and-a-half hours to tour his complex in a car. His son, Kwadwo Safo Jnr, a commercial pilot who acquired his licence at age 19, welcomed Al Jazeera. He is the group’s chief operations officer. After driving past the tortoises, the first point of call was a workshop where a chopper was being manufactured alongside a hand-made engineless five-seater vehicle. Safo Jnr said they will ensure there is no risk in test-flying the chopper and explained how the engineless car will work. [caption id="attachment_11351" align="alignright" width="300"] 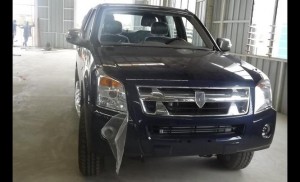 A Kantanka brand of SUV that has gone through testing and is ready for the market[/caption] “The non-engine vehicle does not rely on a combustion engine to move, but an electric motor powered by rechargeable batteries,” Safo Jnr told Al Jazeera. “The batteries can be recharged with solar energy or electricity. As you drive the car on the road, it converts the energy from the sun into mechanical energy which powers the car. “We do everything here. For the engineless car it is only the lights and the tyres that were bought. Everything else from moulding [parts], among others, was done by our local people.” A peacock bade us goodbye from that section, then three zebras smiled at us as we drove on an untarred road towards the colossal buildings on the outskirts. They are four in all, neatly painted and look abandoned when viewed from a distance. The structures serve as the assembling plants for the yet-to-be unveiled Kantanka range of commercial vehicles – sports utility vehicles (SUVs) and pickup trucks. Although some car parts are imported, assembling the more than 1,500 pieces for a car and spraying are done by about 20 young men between the ages of 16-25 years. Amazingly, they have no formal training in building a car. “Most of them are junior and senior high school leavers. The people who are actually racking their brains here to make things work have never been to school before,” Safo Jnr said. Six to 10 cars can be assembled and be ready for the road in a day. Four had been completed and tested by the time Al Jazeera visited. It is hard to tell they were actually assembled in Ghana, save for the Kantanka crown and inscription at the back. Market plans  “We are hoping to increase the number to 12 or 15 daily when we go commercial soon,” Safo Jnr said. “We have delayed … going commercial because Africans and Ghanaians in general have the perception that once it is from Ghana, it is not good – durability is not assured, safety is not guaranteed. So we have decided to use the products ourselves and make sure they are good to go and standardised before we hit the market. “I was in Brazil about six months ago and I was in tears. The whole of Rio de Janeiro was packed with Marcopolo buses … and these are buses that were assembled and made in Brazil. [caption id="attachment_11352" align="alignleft" width="300"] 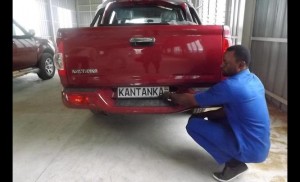 A finished Kantanka vehicle at the speed testing unit of the manufacturing plant[/caption] “They patronise it. In India they encourage made-in-India vehicles – Mahindra and Picanto, etc – and that’s my dream to one day see Kantanka cars on the streets of Accra, Kumasi and all over. I will be fulfilled,” a visibly euphoric Safo Jnr pointed out in his office fitted with a locally made air-conditioner that is switched on and off by slotting in a card. The card in the air-conditioner, explained Safo Jnr, works like one used for an ATM. It is programmed to start the air-conditioner, regulate the temperature and can tell the time when the unit should be turned off. It is multi-functional, he said. Difficult questions  While hugely ambitious and a potential source of pride for a country that is only known for its gold, cocoa and lately oil, the Kantanka project still raises major questions. Who, for example, will buy SUVs in a country where the average income is $1,400 and where just about everyone drives a used car? Do the carmakers perform crash tests, and will they meet the high standards of cars made in Europe and Asia? “We will be doing that in the course of our manufacturing process,” said Safo Jnr, referring to crash tests. The cars will be “affordable” and middle-income earners will be able to buy them. “We know the market and we can assure you that Africans will be able to buy our cars,” he said. In some countries projects such as this attract financial assistance from the government. But Ghanaian governments upon governments seem to have ignored the “Star of Africa”, as Apostle Dr Safo is called by the people of Ghana. Not even his self-made Limousine dubbed “Obrempong”, the speaking change-over-machine, or a range of flat-screen television sets made with wood covers that respond to a simple clap to come alive, increase or reduce volumes have fascinated the government enough to support one of their own. Determined to succeed  The Safo family is undaunted though. [caption id="attachment_11354" align="alignright" width="300"] 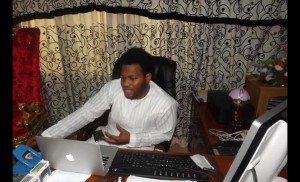 Kwadwo Safo Jnr making a point in an interview with jounalist Kent Mensah[/caption] “Most of the promises they have made, they say they are in the pipelines. I’m sure African pipelines are very choked so the water is not flowing. Not even the corporate world has shown concern … We are still hoping,” said Safo. “We have had several offers from Asia and Europe, but we turn them down because we just want to stay in Africa and make sure that whatever we are doing here we’ll be able to achieve our dreams. “People tell us that we are wasting our time because we won’t get anywhere. But we pay no attention to them, rather we make sure that we prove them wrong by meeting targets that we set for ourselves.” The US-trained young pilot is optimistic about the future. For him, it is a matter of trust and belief in the African. “The whites believed in themselves and got to where they are now. They are no different from us. We all stayed in our mothers’ womb for nine months … If you cut a white and a black man you get blood. The only differences are our names and colours,” he said. “So we should believe in ourselves. We must reduce the talking and put in work.” *Source Al Jazeera .Photos by Kent Mensah]]>