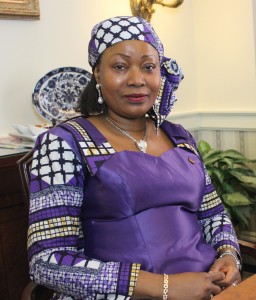 Guinea first Lady Djènè Kaba Condé has described her participation at the USA-Africa Leaders’ Summit as a success as it offered her a platform to beam the spotlight on social issues in her country. While President Conde and other members of the delegation were busy on the economic front presenting Guinea to investors, the First Lady was very active in articulating social issues, notably at the  forum animated by American First Lady Michelle Obama and former First Lady Laura Bush. The forum with other first Ladies offered her the opportunity to build networks that will facilitate future contacts needed to resolve some of the challenges faced by women in her country. In an interview with Pan African Visions, the First Lady said, she used her presence at the summit to talk about infant mortality, maternal health, female genital mutilation, hygiene and sanitation and efforts to improve educational needs of  young girls . With the Ebola virus dominating news from Guinea, the First Lady said the government reacted swiftly with measures to mitigate its spread to unaffected areas.She lauded the efforts of Guinean Doctors and medical personnel who were working round the clock and indicated that her Foundation was also very active on the sanitary aspects that could help keep the virus in check . The resurgence of the virus was unfortunate, but  Djènè  Conde expressed confidence that, efforts to contain its spread will pay off. With Guinea out of international isolation, many changes are taking place in the country with women taking the lead in the civil society and business sectors, she said. With about six female Ministers appointed to  the government by President Conde, , the First Lady saw in this  a recognition of the role that women have to play in the emerging Guinea .Using  the Conde Djènè Kaba Foundation for the promotion of infant and maternal health, the first Lady  has been at the  fore front of the fight against social stigmas like early marriages, female genital mutilation, and others which  have kept women in Guinea from living up to their potential. https://soundcloud.com/multimedia-podcast/interview-first-lady-of-guinea-djene-kaba-conde   With a Master’s Degree in Communication, Djènè Condé understands the importance of education and has used her Foundation to facilitate the integration of women and the disfavored in the community. In contribution to efforts to keep the capital city Conakry clean, Kaba Condé talked of the contest for the cleanest schools and educating young people on basic sanitation. In response to a question on what the diaspora, which turned out en masse to welcome her could contribute towards her social work and development in Guinea, Djènè Conde tasked them with continued patriotism .Guinea needs their expertise and contribution towards  socio-economic development,   the first lady said. Acknowledging that the salary gap remains an issue, Djènè Conde said patriotism should keep Guineans connected to their roots and join hands in moving the country forward. On the cultural differences, the first Lady said there were facets of American life that could be beneficial to her people and she was not personally opposed to any thing that could add value and help to move Guinea forward. The First Lady and President of Conde were in Washington at the invitation of President Obama for the USA –Africa Leaders’ Summit. The Condes were part of the state dinner offered by the Obamas at the White House. 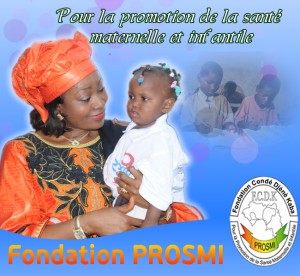