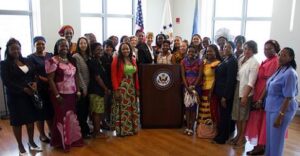 ·         Encouraged men to partner in preventing GBV through behavior change programs, such as in Zambia, where “Boys to Men” project – established in 2014 with $2.3 million – aims to reduce social acceptance and the occurrence of GBV by promoting non-violence in schools.

·         Supported a 2010-2016 study in Burkina Faso, Ethiopia, and Tanzania to assess the effectiveness of various approaches to prevent child, early, and forced marriage, the findings of which will be shared with other regions impacted by the practice.

·         Launched in 2014 the Gender-Based Violence Emergency Response and Protection Initiative,a public-private partnership with Vital Voices and the Avon Foundation, which provides emergency assistance to GBV survivors globally and coordinates a global network of GBV first responders.  Hubs for coordinating response efforts and trainings in sub-Saharan Africa, include Mali, Kenya, and South Africa.