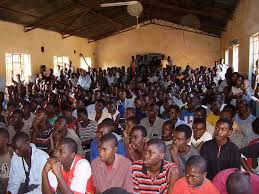 Africa has the youngest population in the world, with approximately 200 million people between the ages of 15 and 24 – a number expected to increase to 330 million by 2034.  Africa also has the fastest growing population in the world. In fewer than three generations, 41 percent of the world’s youth will be African.  By 2050, over a quarter of the world’s labor force will be African. Between 2010 and 2020, Africa will add 163 million people to its potential labor force.  In the 21st century, Africa will be the only continent whose youth population will continue to significantly expand.  There is a shared understanding between the United States and African partners that the future success of African nations will depend on the leadership, skills, and ingenuity of the continent’s youth.

U.S. Commitments to Increase Investment in the Next Generation   In a town hall meeting with 500 young African leaders on July 28, President Obama announced the expansion of his Young African Leaders Initiative (YALI), which was launched in 2010.  Through YALI, the United States is investing in the next generation of African leaders, and has committed significant resources to enhance leadership skills, bolster entrepreneurship, and connect young African leaders with one another, with the United States, and with the American people.  These new investments will include the development of four Regional Leadership Centers in Africa, a vast array of online classes and resources, and seed funding, training, and networking opportunities for young entrepreneurs.   The President also renamed his flagship program the Mandela Washington Fellowship, in honor of former South African President Nelson Mandela, and announced that the Fellowship will reach 1,000 young leaders each year by 2016.   African Governments’ Commitments to Increase Investment in the Next Generation   Many African Governments have been involved in supporting opportunities for youth.  Some made commitments to new activities in the course of the U.S.-Africa Leaders Summit, while others have ongoing initiatives in place.  Below is a sampling of African commitments made in connection with the U.S.-Africa Leaders Summit.   ·         The African Union Commission committed to redoubling its efforts to advance educational opportunities through the Pan-African University; to carry forward the African Youth Charter by urging Member States to consider the African Youth Decade Plan of Action as a road map for implementation; and to propose for adoption by Member States a Declaration and Plan of Action on Employment, Poverty Eradication, and Inclusive Development with a primary focus on youth and women, at the upcoming Extraordinary Summit of Heads of State and Governments of the African Union in Ouagadougou in September 2014.

·         Benin, drawing on its successful Business Promotion Centers, has set up two business-type incubators which have already supported more than 2,500 young professional farmers in agricultural entrepreneurship.  In addition, Benin has committed to recruiting 15,000 youth in 2015 to fill civil servant positions and dedicated 20 percent of the national budget to agriculture to help address youth unemployment.

·         Burundi recently established the Youth Employment Agency, which has helped about 250 high school graduates obtain permanent positions or internships within the public and private sectors during the last three years. Burundi’s Ministry of Youth has also helped some 3,700 young Burundians obtain credit for business start-ups during this period. Over the past year, Burundi has organized several sector and cross-sector meetings and workshops on youth affairs.

·         Cabo Verde will expand its current 20 youth centers to open one at each city and on every island in the country, and to expand the framework of their charters to include information on good health practices and initiatives.

·         Republic of the Congo has instituted the “Corps of Young Volunteers and Civil Service Trainees” (Chantiers Jeunesse et Service Civique) which offers its volunteers an opportunity to do community service and participate in civic education activities while building their professional experiences as volunteer teachers, nurses, and famers. The corps will be run out of the Youth Centers (“Maison de la Jeunesse”) that are being built in each of Congo’s regions.

·         Cote d’Ivoire has declared 2014 a Year of Employment with special initiatives focused on youth, including a Young Entrepreneurs Competition and an “Alassane Ouattara Award for the Young Emerging Entrepreneur.”

·         Gabon has supported the creation of the Central African Economic and Monetary Community’s (CAEMC) “Train my Generation” Fund, which aims to support the training and employment of young people in key economic sectors.

·         Guinea, in partnership with Peace Child International, will host “The Guinea World Youth Congress” from December 2-12, 2014.  The forum will focus on youth unemployment, job creation and eco-business innovations.

·         Senegal, as part of its government’s continued commitment to youth engagement, brought two of its exceptional young leaders to the U.S.-Africa Leaders Summit as part of its delegation and will include young leaders in Senegal’s delegation to the upcoming G-20 meeting as well. Senegal also announced an increase in vocational and skills training programs aimed at providing opportunities to youth. ·         Seychelles is committed to unlock the potential of its youth through its Seychelles National Youth Council, and a newly set-up fund to support young entrepreneurs to boost youth employment.  Seychellois Youth have also joined the SIDS Youth AIMS Hub (SYAH), an inter-island non-governmental organization based in Mauritius and led by a group of youth from the AIMS region – Atlantic, Indian Ocean, Mediterranean and South China Sea – to motivate young people to learn and be concerned about sustainable development. Seychelles has set up a Young Leadership Programme under the University‎ of Seychelles which aims to provide aspiring young professionals both from the public and private sector with a Masters in strategic leadership while also engaging them in community projects. ·         Somalia will launch a youth empowerment framework with key initiatives in job creation and youth representation in the government. ·         Tanzania intends to announce the establishment of a “State House Fellows” program, modeled on the long-standing White House Fellows program in the United States, to identify, train, and provide high-level experience to the next generation of Tanzanian leaders.  This new initiative complements the decades-long Tanzania National Service program, through which thousands of young people have served two year assignments in a wide range of social and economic development fields. * Source White House]]>