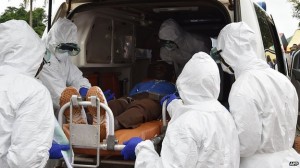 Speaking in Geneva, MSF President Joanne Liu said the situation was “deteriorating faster, and moving faster, than we can respond to”. Earlier, the World Health Organization (WHO) said the scale of the outbreak appeared to be “vastly underestimated”. It said that “extraordinary measures” were needed. The epidemic began in Guinea in February and has since spread to Liberia, Sierra Leone and Nigeria. On Friday, the death toll rose to 1,145 after WHO said 76 new deaths had been reported in the two days to 13 August. There have been 2,127 cases reported. Ms Liu said that although Guinea was the initial epicentre, the pace there had slowed, and other countries – particularly Liberia – were now the focus. “If we don’t stabilise Liberia, we will never stabilise the region,” she said. “In terms of timeline, we’re not talking in terms of weeks, we’re talking in terms of months. We need a commitment for months, at least I would say six months, and I’m being, I would say, very optimistic.” Ms Liu also called for more action from the international community and stronger leadership from WHO – the UN’s health agency. “All governments must act. It must be done now if we want to contain this epidemic,” she said. Ebola is transmitted by direct contact with the body fluids of a person who is infected. Initial flu-like symptoms can lead to external haemorrhaging from areas such as eyes and gums, and internal bleeding which can lead to organ failure. The WHO – which declared a global health emergency last week – recently said the risk of transmission of Ebola during air travel remained low, as the disease is not airborne. As a consequence, Kenya Airways has rejected pressure to suspend its flights to the Ebola-hit states of West Africa. Kenyan media response to continued flights to West Africa Mutuma Mathiu in The Daily Nation describes the move as “reckless” while The Star says the airline is “holding on to its lucrative West African routes as if they were the only business on its portfolio”. “The government needs to get serious. An Ebola outbreak… would result in serious long term-damage” to the national brand, it continues. The Standard notes that while it makes business sense for Kenya Airways to take advantage of West African destinations, the “economic escapade could be costly. The safety of Kenyans supersedes any profits and must come first.” [caption id="attachment_11123" align="alignright" width="300"] 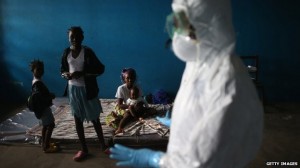 School classrooms have been pressed into use as Ebola isolation wards in Monrovia, Liberia[/caption] However, George Bodo in Kenya’s Business Daily recalls the carrier’s ailing share prices. “In calling on Kenya Airways to suspend nearly half of its high-margin flights, someone should, ideally, be ready with some form of compensation. Otherwise, its stock price will continue being more vulnerable in the coming weeks.” The WHO said in a statement that its staff had seen evidence that the number of reported cases and deaths did not reflect the scale of the crisis. Spokesman Gregory Hartl said experts going house-to-house in Kenema, Sierra Leone, in search of infected people were discovering more cases. “There are probably a lot of patients out there that we haven’t traced or contacted yet,” he said. He said that an 80-bed treatment centre that recently opened in Liberia’s capital Monrovia filled up immediately and that the next day, dozens more people turned up to be treated. Liberia’s Assistant Health Minister Tolbert Nyenswah told the BBC that a new treatment centre opening just outside Monrovia on Saturday would have about 120 beds and could be expanded to 300. Tarnue Karbbar, of the aid group Plan International in northern Liberia, said medical teams were not able to document all the cases erupting. He said many of the sick were being hidden at home by relatives, and many victims were buried before teams could get to the area. Liberian President Ellen Johnson Sirleaf told the BBC on Friday that 355 people had so far died of Ebola in the country, including health workers. She rebuffed criticism that Liberia had been too slow in declaring an emergency. “The government has been doing its best; trying to make sure that we get the right supplies; getting technical help; the expertise that is required to be able to train up people to deal with this, and to avoid putting people at risk including health workers,” she said. The outbreak is also affecting the Youth Olympic Games about to start in China. The International Olympic Committee (IOC) has ruled that athletes from Ebola-hit countries will not be allowed to compete in combat sports or in the pool, and Sierra Leone and Nigeria have withdrawn from the Games. *Source BBC]]>