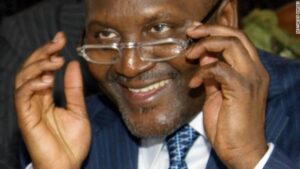 Aliko Dangote, Africa’s wealthiest man, has partnered with U.S.-based Blackstone and Carlyle groups, the world’s two largest private-equity firms, to invest in African energy infrastructure to the tune of at least $5 billion, according to Bloomberg. Accumulating a net worth of $24.4 billion thanks to cement and commodities, Dangote said he struck separate agreements with the private-equity firms, attracting new capital to help address Africa’s energy demands. He committed to invest a combined $5 billion by 2019 with New York-based Blackstone in power projects in sub-Saharan Africa, and he formed a joint venture with Washington-based Carlyle to invest an unspecified amount in Nigerian oil and gas ventures and other sub-Saharan projects. “Africa needs that kind of funding,” Dangote said in an Aug. 2 phone interview from Lagos, Nigeria. “We will do whatever it takes to make people realize that it is happening.” Financing for African power projects has averaged about $1.2 billion a year since the mid-1990s, split between private and public money, according to World Bank. Sub-Saharan Africa’s energy prices are too high and it experiences regular blackouts with 70 percent of the population — 600 million people – without electricity, according to the International Energy Agency. “It’s probably the biggest inhibition to economic growth in Africa,” said Steve Schwarzman, Blackstone’s CEO. “We can change people’s way of life, increase economic growth, and I think we’ll do very well for our investors too.” Blackstone will commit half of the $5 billion in the next five years, with the remaining $2.5 billion coming from Dangote Industries Ltd., Schwarzman said. The money will come from Blackstone’s main buyout fund – Blackstone Capital Partners — and its chief energy pool, Blackstone Energy Partners. Schwarzman said he expects returns from the Dangote venture to be in line with those produced by leveraged buyouts, Bloomberg reports. Blackstone’s private-equity funds produced internal rates of return after fees of 16 percent as of June 30. “It is a place where people make good money,” Dangote said of sub-Saharan Africa. “But even with good money, there comes some good headache.” Dangote said doing business in Africa is getting easier as policies become friendlier to outsiders and governmental practices become more predictable. Still, Blackstone and Carlyle sought him as a partner based on the continent to ease the investment process, he said. “They want to invest heavily,” Dangote said. “They couldn’t really find a local partner to work with. You are not going to move down here and sit here and make sure it is done, because you are doing business all over the world.” Dangote Industries and Blackstone will search for projects through Black Rhino Group, an African infrastructure developer that Blackstone invested in, according to Sean Klimczak, a partner in Blackstone’s private-equity business, Bloomberg reports. The team, which Blackstone will help build, will be based in Johannesburg and Senegal’s capital, Dakar, Klimczak said in an interview. Blackstone has done $25 billion globally in greenfield deals — deals in which it builds operational facilities, according to Klimczak. Those investments include the company’s stake in Kosmos Energy Ltd. (KOS), which developed a deep-water oil field off the coast of Ghana , and its stake in the Bujagali hydropower plant on the Nile River, which Blackstone says cut the cost of power for Uganda’s national utility by two thirds. Carlyle, which this year raised $698 million for its first sub-Saharan Africa fund, counts Dangote among its limited partners. The billionaire told Carlyle when it was raising the fund that he would match the firm’s own 10 percent commitment to the pool. The fund has done three deals, investing in Mozambique-based logistics company J&J Africa earlier this year, helping buy commodities trader Traxys SA in a transaction closing this quarter, and taking a stake in Tanzanian agricultural commodity business Export Trading Group in 2012. Africa, home to six of the 10 fastest-growing economies, is ripe for expansion, Susan Rice, the U.S. national security adviser, said in an interview with Bloomberg News. “A relative little goes a long way if it’s well targeted and well framed and if you leverage the private sector and foundations and civil society,” Rice said. “That’s a new model of development.” The World Bank projects a 5.2 percent growth rate for sub-Saharan Africa this year, driven by strong household spending and rising investment in natural resources and infrastructure. In July, BRICS countries Brazil, Russia, India, China and South Africa agreed to create a $50-billion development bank to fund projects and serve as an alternative source of finance from the World Bank. *Source afkinsider]]>