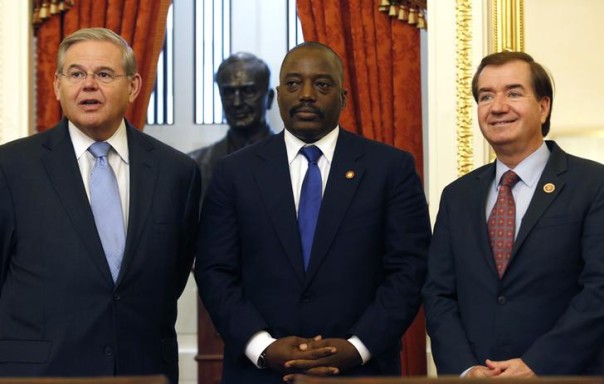 Senate Foreign Relations Chairman Robert Menendez (D-NJ) (L) and House Foreign Affairs Chairman Ed Royce (R-CA) meet with Democratic Republic of Congo’s President Joseph Kabila (C) on Capitol Hill in Washington, August 5, 2014. REUTERS/Yuri Gripas[/caption] The Democratic Republic of Congo’s President Joseph Kabila gave the United States no sign that he would stick to the country’s constitution and stand down from elections scheduled for 2016, a U.S. diplomat said on Tuesday. Former U.S. Senator Russell Feingold, now the U.S. Special Advisor for the Great Lakes Region and the DRC, said the issue of providing space for political opponents and the 2016 elections were discussed when President Kabila met on Monday with U.S. Secretary of State John Kerry on the sidelines of the U.S.-Africa Summit in Washington. But Kabila provided no guarantees, he said. “I did not hear any assurances from them yesterday,” said Feingold when asked about Kabila’s position over a possible constitutional change to the presidential term. He added that the U.S. is “hopeful” that Kabila will respect the two-term limit. Speculation that Kabila could seek to alter the limit of two five-year terms as president has raised fears that political turmoil could return to the vast mineral-rich country and the Great Lakes region which has been engulfed in Africa’s longest running war. Hundreds of opposition supporters took to the streets of Kinshasa on Monday to demand no change to the DR Congo’s constitution after Evariste Boshab, general secretary of the pro-Kabila People’s Party for Reconstruction and Democracy, last week endorsed a change, if approved by referendum. An opposition leader who spoke at that rally, Jean Bertrand Ewanga, was arrested earlier on Tuesday. The United States regards the provision on presidential term limits as an irrevocable part of the constitution, Feingold said, and the 2016 elections as crucial to the peaceful evolution of the region. “Without a credible political system, it is unlikely that the Democratic Republic of Congo will achieve the stability and sovereignty in the region that is needed,” Feingold said at the briefing.   https://www.youtube.com/watch?feature=player_embedded&v=5vhQKWt-zCk#t=5 Lambert Mende, a government spokesman, bristled over Feingold raising political questions, saying that Congo’s president is in Washington to build commercial ties with the United States, not to answer questions about how Congolese institutions are organized. “We have not felt the need to give any assurances because this (constitutional revision) is a Congolese problem and this is not a Congolese meeting,” Mende told Reuters. Kabila first assumed power after his father’s assassination in 2001 and he went on to win Congo’s first democratic election in 2006. His second election, won by a narrow margin in 2011, was criticized by observers for voter intimidation and ballot stuffing. Feingold also repeated warnings that there would be no negotiations with the Democratic Forces for the Liberation of Rwanda, a rebel group in the region formed by the remnants of Hutu rebels from Rwanda. Commonly known as FDLR, the group was given six months from May 31 to surrender, but in the first week, only 185 soldiers had turned themselves in, he said. “There have to be significant surrenders in the near period or the military option will be exercised,” Feingold said. *Source Reuters/ trust.org]]>