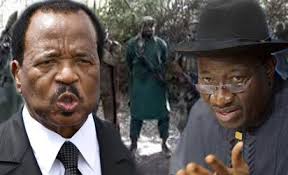 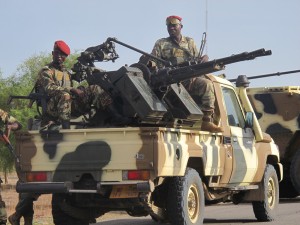 This photo taken on June 17, 2014 shows Cameroonian soldiers standing next to pick up trucks with mounted heavy artillery in Mora, northern Cameroon, which houses a miltiary base where human and logictical resources have been mobilised to face armed Islamist group Boko Haram. Boko Haram, which in April 2014 kidnapped more than 200 schoolgirls in northeast Nigeria to international condemnation, has been waging a brutal, five-year insurgency that has claimed thousands of lives. AFP PHOTO / REINNIER KAZE (Photo credit should read Reinnier KAZE/AFP/Getty Images)[/caption] Without casting doubts on the patriotism of Biya and Jonathan, one cannot help but come out with the strong feeling that the people are not been told the truth. An example will be the freedom for French hostages kidnaped in Northern Cameroon. Each time their release is followed by a colorful ceremony and President Biya even granted audience to the Mournier family in Cameroon. Turns out Millions of Dollars are paid to obtain the release of the hostages. To who is the money paid? For what intent is the money been used? The people are never privy to answers; the governments are vague in communication about Boko Haram and Boko Haram is exploiting this communication gap to the fullest. At the end of the day, Cameroon and Nigeria must go beyond Biya and Jonathan. Boko Haram is evil. If Cameroon is engulfed in conflict, it is the entire Central African Sub Region that will experience catastrophic consequences. If Nigeria is made ungovernable because of Boko, this will reverberate across the entire continent. This is one fight that needs cooperation from the people, that needs cooperation from both countries, but this will be hard when leaders do not share the right information, when there have succeeded in making it appear there is more to the Boko Haram issues than meets the eye. Until the people force answers out of the leadership, the current trend spells nothing but doom with wreckage that may never be pieced together again.      ]]>