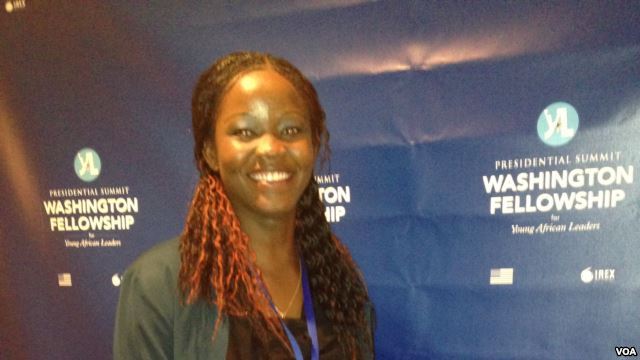 oung African Leaders Initiative fellow, Abbigail Muleya, was praised by President Barack Obama for her determination in achieving her goals. (Photo: Marvellous Mhlanga Nyahuye)[/caption] WASHINGTON DC—It’s almost a month after some 500 exceptional African youths completed their studies under the coveted Young African Leaders Initiative, now known as the Mandela Washington Fellowship.But a select few, including five Zimbabweans, remain on internship with leading United States enterprises to refine their occupational acumen and leadership prowess. The Mandela Washington Fellowship took them to some of America’s most prestigious universities and colleges where they received extensive training, mainly in business leadership and public management. And now they are capping their initial six-week journey with two months of placement in Washington and elsewhere. Co-founder of the tech company, Hypercube Hub, Irene Chikumbo, is interning with the U.S. African Development Foundation, a federal agency that supports community development in Africa. Chikumbo works in the department that processes financing for viable but disadvantaged businesses. She’s been on the job for four weeks. So, what’s the one most important lesson she has learned so far? “There’s been a number of learnings mainly around the sector of development and what models actually work,” Chikumbo told VOA. “In this case they are empowering the communities. Usually, my understanding of what some organizations do is that they come and give food aid and various other aid. “But this organization is giving grants to already existing businesses to make sure they become sustainable,” she added. An expert in Information and Communication Technology (ICT), Chikumbo said she hopes to harness her wealth of gained experience and channel it towards social development in Zimbabwe. BUSINESS MANAGEMENT Another intern, Abigail Muleya, is honing her skills with Deloitte Consulting, a leading firm that offers business management services such as auditing, financial advisory, consulting and taxation. The company is one of the so-called “Big Four” global professional services giants; the other three being Ernst & Young, Price Water House Coopers and KPMG. Deloitte Consulting ranks number one in the world, which elevates the stakes for Muleya, and makes her arguably one of the most privileged 2014 interns. In Zimbabwe, Muleya works with a Binga-based organization called Zubo Trust, where she overseas program monitoring and evaluation at community level. But now she has the honor of assessing programs for the world’s top business consultancy, handling records for larger-than-life institutions such as the World Bank. And as anyone could imagine, the sudden upgrade brought its own fair share of challenges for Muleya. But she explained she was quick to adapt and rise to the occasion. “It was really a big challenge for me,” Muleya said. “But I took that challenge and turned it into an opportunity, I told myself I need to do this; I need to learn. “The more I did my research, Googled information and interacted with my colleagues, the more I realizes I am able, I can do it.” START-UP BUSINESSES Now enter David Chakombera, attached to the Overseas Private Investment Corporation (OPIC), a federal agency that works with the U.S. private sector, helping American companies to establish and gain traction in emerging markets. Chakombera says his association with OPIC has helped him gain a lot of entrepreneurial perspective that he will be sharing with other start-up business owners when he gets back in Harare. “I want to engage young entrepreneurs and tell them about some of these organizations where they can go for funding,” Chakombera said. The other two interns are 21-year-old ICT entrepreneur, Takunda Chingonzo, who took President Barack Obama to task over U.S. sanctions on Zimbabwe at the recent U.S.-Africa Summit in Washington, as well as human rights lawyer Rumbidzayi Dube. The five are set to conclude their internships in four weeks’ time, and will be heading back to Zimbabwe with an affluence of knowledge and experience in their respective fields of expertise. *Source VOA