Rose Skelton* A new book, The Bright Continent, seeks to shake up the development community and counter both the afro-optimist and afro-pessimist arguments. 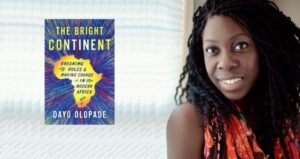 It was a quest to address the negative portrayal of the African continent that inspired Dayo Olopade to research and write the book The Bright Continent. A Nigerian-American journalist covering politics in the United States (US) and international development from Washington DC, she found the thinking about Africa in the US press shallow and uninformed. “I’m someone who very proudly has a foot in two worlds, as someone who is diaspora. So I could tell how bankrupt the narrative about Africa was in my profession,” she says. “I suspected it was that people had not been exposed. Africa has a salient brand but very little depth of understanding. I thought it was really just a matter of producing more images of Africa, more information for people to absorb, more ways to complicate their analysis – and that would lead to this project of narrative correction.” The resulting book – its title is a play on and response to Joseph Conrad’s novel Heart of Darkness – is a painstakingly researched and lively tour of the people, institutions and ideas currently at work on the continent. There are chapters on functioning and failing governments, on Western charities that do more harm than good, on innovative forms of education, on social networks, on scammers, microfinance and health. Each chapter offers on-the-ground reporting and observation of people in 15 African countries. It tells their stories, describing their lives and explaining their survival techniques and prosperity strategies. These tales are crafted to offer insight, and ideas about how things might change on a larger scale, if given the right institutional and government support. Olopade had found that the development books she used for research were lacking in ordinary people. “I’m not a development economist, but I am a reporter. Trying to situate people in the context of these policies seems like a very natural project for me,” she says. She argues that the community of people interested in African development is “too small, too rigid, too antiquated in their methods and their assumptions”. The book is largely aimed at them in the hopes that it might help to affect policy. The book is not, Olopade is keen to point out, about ‘Africa rising,’ the overly positive view of Africa taken in recent years to combat the idea that Africa is solely a continent of woe. For her, that narrative is just as redundant, except that it was probably thanks to this view of the continent starting to “permeate and trickle into the consciousness of the gate-keepers of Western publishing” that this book ever found a publisher in the first place, she says. *Source African Report
]]>