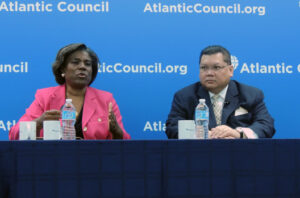 The inaugural US-Africa Leaders Summit begins next week from August 4 to 6 in Washington. As the first and largest initiative of its kind, President Obama has invited 51 heads of state and government to the United States for a three-day event that is intended to strengthen US-Africa ties and showcase American commitment to partnership with Africa. It is in this context that the Africa Center hosted Assistant Secretary of State for the Bureau of African Affairs Linda Thomas-Greenfield for a public address previewing the Summit. Africa Center Director J. Peter Pham moderated the on-the-record session, which included an audience of current and retired US and African ambassadors, current and former US officials, business leaders, members of the NGO community, and other stakeholders. The Summit, Thomas-Greenfield noted, is designed as a unique and interactive opportunity to engage US and African leaders. It will bring together African heads of state and US government officials, business executives from the US and Africa, members of Congress, and civil society leaders. Thomas-Greenfield spoke about the Obama administration’s vision for the Summit, which will focus on three pillars: trade and investment, peace and security, and Africa’s democratic development. During her remarks, Thomas-Greenfield emphasized that the Summit does not represent a new relationship with Africa, but instead builds on strong historical ties between the US and African countries. Thomas-Greenfield called the Summit an unprecedented opportunity to strengthen both bilateral and regional ties and to address issues that equally affect African countries and the United States. http://www.youtube.com/watch?v=Q-N1qV422mQ Thomas-Greenfield spoke of the Summit’s role in cementing the progress of ongoing US initiatives in Africa, including: Power Africa, launched in 2013 with the intent of doubling Africans’ access to electricity; the African Growth and Opportunity Act, signed into law in 2000 to incentivize African countries to open their economies and build freer markets; and the Young African Leaders Initiative, launched in 2010 to support young African leaders. These programs, among others, have already seen great successes; Thomas-Greenfield noted that many African nations have requested expanded US programming. Through the US State Department-led African Contingency Operations Training and Assistance program, the United States has trained more than a quarter-million African peacekeepers in 25 countries since 2005. The US also continues to support and equip African Union-led peacekeeping missions across the continent, including Somalia, Mali, and the Central African Republic. Lastly, Thomas-Greenfield reiterated US commitment to strengthening democracy and governance across the continent. This goal requires a focus on institutions, civil society, and the rule of law, all of which are included throughout the Summit. * Source atlanticcouncil]]>