“When two elephants fight it is the grass that suffers.” 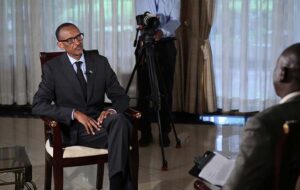 The Battle For Africa, the first in a two-part People & Power investigation into the effects of China’s increasing influence in Africa, premieres on Al Jazeera on Thursday, 28 August 2014. Emmy-winning Sierra Leonean journalist Sorious Samura travels to Kenya, to witness how the rise of Chinese business in Africa has changed the balance of power between African governments and the West. “African leaders can now look elsewhere for meaningful economic and political support,” says Sorious. In Kenya, Chinese infrastructural projects include schools; thousands of kilometers of new roads; a new airport terminal; and a port terminal in Mombasa at the start of a $25 billion dollar railway line linking the capitals of Kenya, Uganda, Rwanda and South Sudan. “It is estimated that 30% of all new projects in Africa are the result of Chinese investment,” says Sorious. “Africa needs new infrastructure to speed up its development; China needs it to enable the free flow of mineral resources it needs from the continent.” As leaders across the continent become more vocally critical of Western influence, The Battle For Africa contrasts China’s policy of no-strings-attached investment with the West’s more evangelical tradition of conditional aid, looking at the ICC trial of Kenyan president Uhuru Kenyatta as an example of differences in approach to Africa. Kenyatta, opposition leader Raila Odinga, and John Mosonik from Kenya’s Department of Infrastructure all weigh in on the topic, as do the presidents of Rwanda and Uganda. Growing Chinese influence doesn’t necessarily mean declining Western influence though, as Christian Turner, the British High Commissioner to Kenya, points out. “The idea that there is some sort of competition with China doesn’t really reflect the reality of the way the world works in the 21st century,” he adds. “This isn’t the Cold War.” While Chinese involvement in Africa has centered on infrastructure projects, the West is supporting Kenya as a new frontline in the war on terror, “a hot war being fought by African troops backed by the West,” according to Sorious. “Kenya alone has committed almost 4 000 soldiers to the conflict in Somalia.” This new political environment represents the greatest increase in African independence since the 1960s, but will the old problems of tribalism and corrupt leadership undermine the optimism? Mau Mau veteran Gitu Wa Kahengere is disappointed that Africa is still looking externally to solve its challenges. “We thought by today – 50 years after independence – we are not inviting Chinese to come and build a standard railway line. We would do it. Therefore we say: those who we handed over the independence that we recovered have failed us,” says Gitu. “That vision of self-reliance is not there.” *Source in2eastafrica. People & Power’s Battle for Africa premieres on Al Jazeera on Thursday, 28 August 2014, at 00:30 CAT.]]>