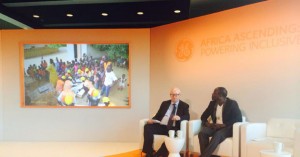 Senegalese singer, Akon, speaks to The Economist U.S. Editor, Matthew Bishop, about solar energy for Africa citing his Akon Lighting Africa project. (Photo Source: Akon Facebook).[/caption] Akon’s appearance at the Africa Ascending forum in Washington D.C. on August 4th just upped his street and corporate cred. The Senegalese singer shared his views on sustainable solutions for Africa’s energy crisis, and referenced his solar powered Akon Lighting Africa(ALA) business, which is improving the lives of people in at least nine African countries (including Senegal, Burkina Faso, Gabon and Sierra Leone). ALA offers pre-paid solar lighting system as well as offering public lighting projects in villages. Access to electricity positively effects education, infrastructure and the economy. Speaking to The Economist U.S. Editor, Matthew Bishop, on choosing business rather than charity to aid Africa, Akon said “Ultimately that’s the only thing that’s going to grow Africa, [it’s] business. Africa is wide open for business. You get tired of Africa becoming a charity case… it just needs a little help, as far as creating the basic infrastructure…then the whole of Africa can be built in a way where it can compete with all the other nationals.” The multi-platinum selling singer whose hits include: “Locked Up” and “Hold My Hand ft Michael Jackson”, spoke about growing up in Senegal with no access to electricity and appreciating his move to America. “I was blessed to be able to come to the U.S. with my dad and I’ve seen a better life, but it really hurts a lot knowing that Africa has all these resources and we haven’t fully taken advantage of it.” The Akon Lighting Africa, which partnered with Give1Project and ADS Global Corporation SA, aims to provide electricity to one million households by the end of 2014. Approximately 550 million Africans do not have access to electricity according to the World Bank. The Africa Ascending: Powering Inclusive Growth forum is organized by General Electric and The Economist magazine, and focuses on infrastructure, innovation and investment. This is in line with the topics of discussion for the Africa Summit taking place in Washington D.C. this week. *Source thisisafrica]]>