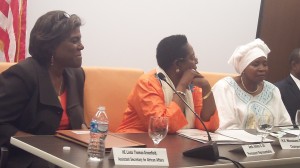 Left to right Assistant Secretary Greenfield, AU Ambassador to US Amina Ali, and AU Chair Dr Dlamini Zuma[/caption] African Union Chair Dlamini Zuma painted a rosy perspective of Africa as the continent grapples with current challenges. Speaking at the inaugural reception of Africa House, the name of the African Union Mission in Washington,DC, Ambassador Zuma said, once Africa eventually comes round to speaking in one voice, the continent will live up to its incredible potential. Addressing a full house which included Assistant Secretary of State for African Affairs Ambassador Thomas Greenfield, representatives from African Diplomatic Corps, Famed Hollywood Actors like Lou Gossett Jnr, Africans and African Americans, Ambassador Zuma harped on the theme of unity and highlighted the need for Africans to work as one in building a better future. Such a future includes food sustainability, better infrastructure, gender equality and peace, the African Union Chair said. https://www.youtube.com/watch?v=61u26vOaDcw&feature=player_detailpage#t=20     Drawing inspiration from a poem by Kenya’s Anna Mwalagho and electrifying music presentations by Uganda’s George Okudi, Zuma lauded the talent of young Africans , while lauding the African Union Mission in Washington DC, for providing a place that Africans and their Diaspora friends can call home. In an earlier word of welcome, the African Union Envoy to the USA, Amina Ali, said the African House will serve as home to all from the continent and its Diaspora.  Rich in animation and emotions, the inauguration also had the strong participation of the African Diaspora considered as the 6th Region of the African Union. Prominent attendees at the inaugural reception included the African Union Vice Chair Erastus Mwencha, the USA Ambassador to the African Union Reuben Brigety,  and Mel Foote of the Constituency for Africa Located on Wisconsin Avenue, the African Union Office is an imposing three storey edifice with offices, conference rooms, and a translation booth.  Its inauguration was part of several events taking place as part of the maiden USA-Africa Leaders Summit .  ]]>