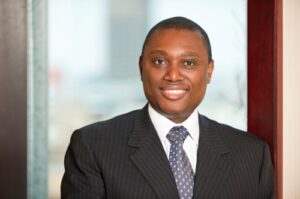 Mr Sim Tshabalala, Chief Executive of Standard Bank Group, Africa’s largest bank by assets and market valuation[/caption] Africa offers US multinationals a compelling trade and investment opportunity thanks to the rapid economic growth rates being experienced across the continent along with burgeoning population growth and increasing urbanisation, according to Standard Bank Economic growth in sub-Saharan Africa has exceeded 5% a year for more than a decade now giving the continent a 4.1% share of global gross domestic product (GDP), up from 3.4% in 2000. By 2050 one in four of the world’s population will reside in Africa with at least 60% of the continent’s people living in urban centres. “Trade with African economies and investment in Africa offer big rewards but it requires sound local knowledge, strong local partnerships, and a long term view,” said Mr Sim Tshabalala, Chief Executive of Standard Bank Group, Africa’s largest bank by assets and market valuation. “In that sense the US plan to revitalise its commercial and trade links with Africa couldn’t come at a more opportune time.” The renewed US interest in Africa is embodied by President Barack Obama’s Power Africa Initiative which was launched last year and aims to double access to power in six partner countries in sub Saharan Africa: Ethiopia, Ghana, Kenya, Liberia, Nigeria and Tanzania. The US government has committed more than $7 billion in financial support and loan guarantees to the project over the next five years. That commitment has been doubled by the almost 30 private sector partners who have pledged $14.7 billion in project finance through direct loans, guarantee facilities, and equity investments for Power Africa. Nevertheless, the US still has some catching up to do. While the US is a major investor in Africa – particularly in information technology, manufacturing, resources, power, and financial services – trade flows have advanced on a much gentler trajectory. Although US-Africa trade doubled from about $50bn in the early 2000s to $110bn in 2013 it still lags China whose trade with Africa exceeded $200 billion last year. Yet it is precisely China’s emergence as Africa’s largest trading partner which underscores the potential value on the continent for US firms. Foreign direct investment into Africa has increased dramatically in the last decade and a half, and continues to grow. In 2013, FDI to Africa increased by 9.6% to an estimated $56.6 billion, representing 5.7% of global FDI.  FDI is forecast to exceed $60 billion in 2014.  Total foreign inflows to the continent reached $186 billion in 2013, and are expected to top $200 billion in 2014. Emerging economies – and the BRICS in particular – are seizing the African opportunity. In 1992 China, India and Brazil accounted for just 3% of Africa’s global trade compared to 25% today. A wide range of firms from India, Brazil and South Africa are also expanding quickly in Africa, often with strong support from their governments. Yet, while the US may be arriving late to this party, the world’s biggest economy still offers unrivalled commercial and industrial excellence in many key fields. The vibrancy of US multinationals, with their proven track records, industrial processes, established retail networks and brands, are of immense attraction to the ongoing consumer revolution taking place across Africa. US firms are also increasingly interested in the commercial opportunities in Africa. Major private equity firms, including the Carlyle Group, have launched Africa-focused funds valued in the hundreds of millions. Leading US technology companies are investing in new ventures and start-ups across the continent.  IBM has invested at least $100 million, with new Innovation Centres in Lagos and Casablanca.  Microsoft and Intel Capital are embarking on partnerships with African tech companies, and Google is working on delivering broadband to remote communities. “Africa has come a very long way from its era of aid-dependence,” said Mr Tshabalala. “The rapidly emerging middle class in Africa is driving large-scale diversification of Africa’s economies which offers immense opportunities for companies willing to invest.” In Nigeria the middle class has swelled by 600% since 2000.  Today, Nigeria is home to 4.1 million middle-class households, containing 11% of the total population.  Other economies doing particularly well on this measure include Angola, where 21% of households are considered middle class followed by Sudan (14%) and Zambia (10%). The number of mobile phone users in Africa has multiplied 33 times since 2000 and in the next five years it is likely that almost every adult African will have a mobile phone. Over 50% of urban Africans are already online, a figure that is likely to grow rapidly over the next decade. “While there is still a lot to be done the overall direction that Africa is moving in is overwhelmingly positive,” said Mr Tshabalala. “US companies can do very well in Africa provided they put in the effort to understand the continent’s markets in detail, rather than looking at the continent as a single, homogenous entity.”]]>