Former military president, General Ibrahim Badamasi Babangida (Retd), has given approval to the anticipated 2015 re-election bid of President Goodluck Ebele Jona­than, just as he urged Ni­gerians to be patient with the president in his ef­forts to tackle the myriad of problems facing the country. In an interview with journal­ists at his Minna country home to mark his 73rd birthday, Ba­bangida said there is nobody in Jonathan’s shoes who would not take advantage of a second term. “Well, if you were in his shoes, won’t you want to come back if you are there? If you believe in what you are doing, and you are doing well, why shouldn’t you? I think we once got it right, and we can still get it right, and you guys have to get it right. “I think what is lacking is what I have always referred to as voter education, the level of understanding, the level of belief are still below what we expect. For instance, if you (the journalist) were elected as the governor of your state today, you should be able to take a sur­vey of whether people like you because you are doing well, but they may not like you because you are not fulfilling the prom­ises you made to them. “The only means is for the people to be patient and at the time of next election, the leader gets voted out. So, we have not reached the stage where the or­dinary voter would say no, as a matter of fact, their leaders have not done well, let us vote them out. Once you do that, I think in the next dispensation, somebody else would come in and I really hope we would reach that stage where ideas are the main issues, not which zone should produce X, Y, Z posi­tions. I think this is still part of the little problems that we are facing.” As to what the old genera­tion of leaders is doing about the multifarious problems con­fronting the country, Baban­gida said the leaders are doing a lot, and if there is any set of Nigerians who understand the problems of this country, they are those of them who have had the opportunity to be at the helm of affairs at various times in the life of the country. “We know what the problem is, we appreciate what the Pres­ident is doing, and the best we can do, and what we are always doing is to be of help or assis­tance to him in forms of advice, meetings, interaction and so on. “I think this is one of the luckiest countries, which has got seven living heads of state including interim head of gov­ernment, and we have always availed ourselves through the President and we have also ap­preciated the problems the Pres­ident, is facing, and because we were once there, we appreciate it more than any other person in the country. The best we could do is to always sit with him in an environment that is really conducive and then give him advice, and I think I am glad to say that we are doing the best we can to assist him, while we urge Nigerians to be patient with Mr. President. 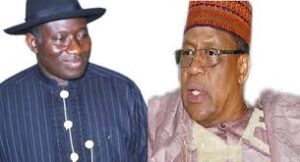 “I have always said that there would be Nigeria in 1,000 years to come and, therefore,everybody who has followed the history of this country would have observed that every administration from the late Tafawa Balewa period to the current regime, every administration had faced one challenge or the other during the course of it’s time and this one cannot be the end because the last administration had its own challenge too. The impor­tant thing is that we the people should strive hard to overcome the problem and then move for­ward. I think what is happening to us is not new in any develop­ing country.” Reacting to a question on the level of insecurity in the country, especially as it affects the abducted Chibok girls, the former leader responded thus: “I am aware of what the gov­ernment is doing now, and I know that there is a lot of com­petition. It is no longer an issue that you could ask the military to move inside Sambisa forest and release these young girls. I think what Nigerians want is that they want them released and come home alive, and not dead. Nigerians want them alive and this is a very genuine thinking. From my experience as a professional soldier, we need a lot of planning, a lot of co-operation. A lot of studies have to be done to achieve this objective. “Either 217 or 219 or what­ever the number is, it is a lot of number to lose just like that, but I think the government is trying from what we got during our last briefing, and I am quite satisfied  that efforts are being made to get them released. You see, the objective is to get them out of that place alive because the operative word is alive, hence if we enforce any military operation, we can get them all killed. So, the objective could be defeated.” Talking about impunity in governance, the impeachment saga and the militarization of the electoral process, IBB ex­pressed disagreement, saying, “it is still part of the learning process. “You may call it impuni­ty,  you may give it any name you want, but for those  of you who are observers, I think I would like to see a situation where a chief executive of a state is being accused and he is given an opportunity to come forward and say look, this is not true. He has  his team of lawyers, the state House of As­sembly would also have their lawyers too, and they should make it public so that the public gets to know what is happening, and at the end of the day the two parties would iron out their dif­ferences. “But don’t forget that in our current situation, like I said, we are just in the learning process because if it is one particular party that has more than the two-thirds majority in the House of Assembly  to remove a governor anytime they find there is a breach of the constitu­tion or gross misconduct it will be easy. But I hope to see a situ­ation where the governor as the chief executive of the state can talk over the heads of those of them in the assembly and reach out to the public assuming the governor is doing well, the pub­lic will support him.” Babangida expressed the hope that a time would come when the immunity clause will no longer be an issue, although every chief executive has some­thing in him that needs protec­tion like his name, his reputa­tion, his family and so many other things. According to the former leader, those are the things he should protect, not immunity that is there for one thing or the other. “But if you accuse me, I will like to prove to you that you are wrong. But time would come when the chief executives would rather defend themselves especially on the issue of their personal integrity. They are supposed to remove this issue of immunity clause and the rest of them. *Source Sun/dna nigeria]]>