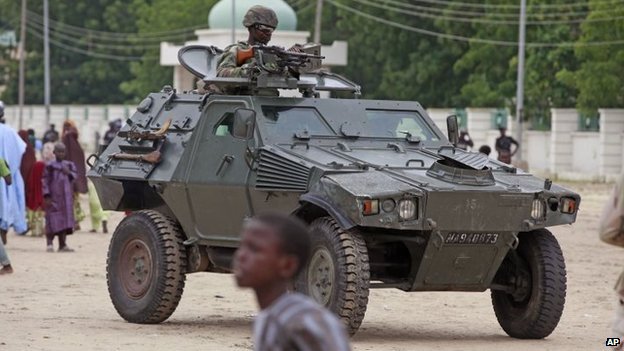 Reports claimed that the troops had joined thousands of citizens fleeing the fighting, but Nigeria said they were conducting a “tactical manoeuvre”. Clashes are said to be continuing in the border town of Gamboru Ngala. Boko Haram on Sunday released a video claiming that it had established an Islamic state in the towns and villages it controls in north-eastern Nigeria. The group’s five-year insurgency has intensified in recent months despite the deployment of thousands of extra troops to the worst-affected areas. Last week, a group of soldiers refused to follow orders to go and fight Boko Haram, saying the militants were better equipped. Insurgents also seized one of Nigeria’s two main police training academies, which is near the town of Gwoza, captured earlier this month. The Nigerian soldiers were accommodated in the Cameroonian town of Maroua, about 80km (50 miles) from the Nigerian border, Cameroon army spokesman Lt Col Didier Badjek told the BBC. The Nigerian defence ministry said in a statement that the soldiers found themselves “charging through the borders in a tactical manoeuvre” after a sustained battle. The statement said it was standard practice for them to hand over their weapons and the soldiers are now returning home. Thousands of civilians are also said to have fled across the border. Cameroon has officially closed its 1,600 km border with Nigeria to help contain the spread of the deadly Ebola virus. But correspondents say this is impossible to enforce in remote areas near the fighting. Analysis: Tomi Oladipo, BBC News, Lagos This is the largest reported case of Nigerian troops fleeing from battle so far and it is even more telling that they have crossed the border into Cameroon. It is not clear whether these soldiers intend to return to the Nigerian army or if they have deserted altogether. It raises the question whether the continuing violence in north-east Nigeria is a result of the failures of the Nigerian military as opposed to the strength of Boko Haram, considering there have been glaring problems in the equipping and deploying soldiers on the frontline. There have been reports of mutinies within the army ranks and recently soldiers’ wives protested at the deployment of their husbands, saying they were ill-equipped to fight the insurgents. [caption id="attachment_11387" align="alignright" width="300"] 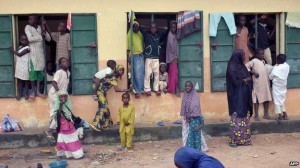 Thousands have fled recent fighting – these people are now living in a school[/caption] The Nigerian military has insisted its forces are up to the task but the fact that Boko Haram has been able to keep hold of Gwoza for some weeks now means residents of towns and villages across the north-east fear they could be next. Boko Haram launched an attack on the police station and a military base in Gamboru Ngala at 05:30 local time (04:30 GMT), the AFP news agency reports. In May, some 300 people were killed in an attack which left much of the town in ruins. It is near Gwoza, the largest town under control of Boko Haram. In the most recent census, in 2006, it had a population of more than 265,000 people. In the 52-minute video released on Sunday, Boko Haram leader Abubakar Shekau said Gwoza was now “part of the Islamic state”. 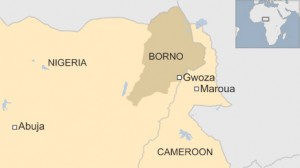 He did not specify whether his group now had any links to the Islamic State (IS) group, which has seized much of northern Iraq in recent months, prompting the US to respond with air strikes. There is no evidence for such links but in July, Mr Shekau congratulated IS on its territorial gains. *Source BBC ]]>