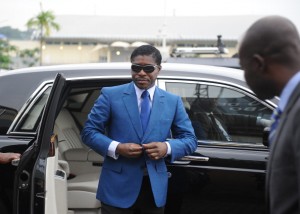 A picture taken on June 24, 2013 shows Teodorin Nguema Obiang, the son of Equatorial Guinea’s president Teodoro Obiang and the country’s vice-president in charge of security and defence, arriving at Malabo stadium for ceremonies to celebrate his 41st birthday. AFP PHOTO / JEROME LEROY (Photo credit should read JEROME LEROY/AFP/Getty Images)[/caption] After three years in court, federal prosecutors on Friday revealed they had agreed to settle corruption-related cases involving more than $70 million in real estate and luxury goods amassed by the son of an African dictator. The settlements, which are not yet final, would mark an end to two cases which the Justice Department had put at the center of its pledge to battle corruption in the developing world by going after the fruits of alleged illicit enrichment. Neither side has disclosed terms of the settlement. It is unclear whether the son, Teodoro Nguema Obiang Mangue, known as Teodorin, had agreed to relinquish part or all of the eye-popping mountain of riches the U.S. believes he acquired through the plunder of resource revenue in his native Equatorial Guinea. Despite vast oil riches, 77 percent of Equatorial Guineans live in extreme poverty, according to World Bank figures. The country, on the western coast of Africa, is courted by American oil companies. The Justice Department and Duane R. Lyons, an attorney for Nguema, did not respond to requests for comment on Monday. In forfeiture cases brought in Los Angeles and Washington, federal prosecutors had sought to seize a $38.5 million Gulfstream luxury jet, a $30 million mansion in Malibu, California and nearly $2 million in Michael Jackson memorabilia, including a crystal-covered glove once worn by the late star. The real estate and other property have remained in Nguema’s possession, as the Justice Department pressed its case. Nguema amassed this wealth despite earning an official salary of just $100,000 a year, according to the Justice Department. Ngeuma is the son of President Teodoro Nguema Obiang Mbasogo, who has ruled Equatorial Guinea since 1979. The Justice Department unveiled the forfeiture cases in 2011 as centerpieces to its Kleptocracy Asset Recovery Initiative, a program intended to seize ill-gotten gains stolen from the developing world. “We are sending the message loud and clear: the United States will not be a hiding place for the ill-gotten riches of the world’s corrupt leaders,” Lanny A. Breuer, then chief of the department’s criminal division, said when the Justice Department filed the cases. Though prosecutors allege that Nguema violated money-laundering statutes in moving his wealth through the United States, the attempt to confiscate the property is a civil matter that does not involve his criminal prosecution. According to Bruce Reinhart, a former federal prosecutor and a specialist in asset forfeiture, a settlement may allow the U.S. to seize the property while at the same time sparing Nguema the need to appear in a U.S. court. Civil forfeiture also does not rule out prosecution, according to Reinhart. “You can forfeit the assets now and indict him separately but in the meantime you’ve taken away his toys,” said Reinhart. The U.S. effort against Nguema followed revelations in 2009 that American officials had routinely allowed Nguema access to the United States despite a federal law intended to bar corrupt foreign officials from receiving U.S. entry visas. Current and former U.S. officials told The New York Times then that such leniency was due to the country’s oil wealth. The following year, Attorney General Eric H. Holder Jr. announced the Kleptocracy Initiative at a summit of the African Union in Uganda. Upon learning that some Nguema assets, including the Michael Jackson memorabilia had been removed from the United States, Justice Department officials demanded the material be returned. However, the crystal-covered glove itself was placed on display last year in Malabo, the Equatoguinean capital, where the government said “justice has at last returned [the memorabilia] to its rightful owner.”   [caption id="attachment_10471" align="alignright" width="150"]

GUINEAECUATORIALPRESS.COM
The famous $275,000 Michael Jackson glove on display in Malabo[/caption] Officials in France have likewise pursued Nguema’s assets, reportedly seizing a $180 million house in Paris and luxury cars as part of an embezzlement investigation. According to Ken Hurwitz, a legal officer at the Open Society Justice Initiative in New York who has followed the cases closely, it may be difficult for American officials to return any of the seized assets to people of Equatorial Guinea. While it may be possible to establish a means for the public to claim the funds, anyone seen to be doing so could incur the anger of the local government, he said. The Justice Department “should get as strongly worded, as binding and as enforceable an agreement as they can to allow this money under the Kleptocracy Initiative to be returned without endangering the people of Equatorial Guinea,” said Hurwitz. The legal process up to this point has produced a valuable public record underpinning the allegations of corruption against Nguema, according to Hurwitz. But he said the lack of a trial would be disappointing. “Certainly from an Equatorial Guinean citizen’s point of view, from our point of view as a civil society organization, it’s frustrating. I would rather they didn’t settle,” he said. “You work with the tools you have.” *100r.org]]>