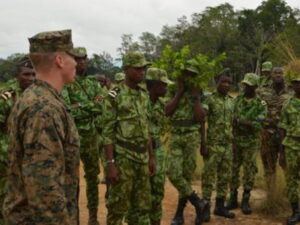 The team of 15 Marines and sailors trained with their Gabonese counterparts from the Agence Nationale des Parcs Nationaux and the Gabonese military and Gendarmerie to demonstrate tactics that could then be applied to combat all types of illicit activities, to include narcotics trafficking. The Americans and Gabonese focused on marksmanship, combat life saver and casualty evacuation, tactical site exploitations, mission planning, basic infantry skills, and patrolling tactics. At the conclusion of the engagement, the Gabonese students completed an eight hour-long patrol base exercise, including a comprehensive mission brief with follow on operations in the jungle, and an assault on a simulated enemy camp with follow on detainee handling, site exploitation, and casualty evacuation procedures. First Lt. Nicholas Bender, the assistant team leader, was one of the Marines responsible for finding out what exactly the Gabonese task force hoped to take away from the partnership exercise and then joining together with them to formulate a training plan. According to him, “when we started the training, it was clear to me the Gabonese were very interested in any training that would enable them to better prevent and counter illegal activity in their country.” Special-Purpose Marine Air-Ground Task Force Africa 14 is the most recent rotation of Marines and sailors to arrive at Naval Air Station Sigonella, Italy, for theater security cooperation missions in various African countries. This iteration is manned by Marines and sailors from 3rd Battalion, 8th Marine Regiment, permanently based out of Marine Corps Base Camp Lejeune, N.C. *defenceweb]]>